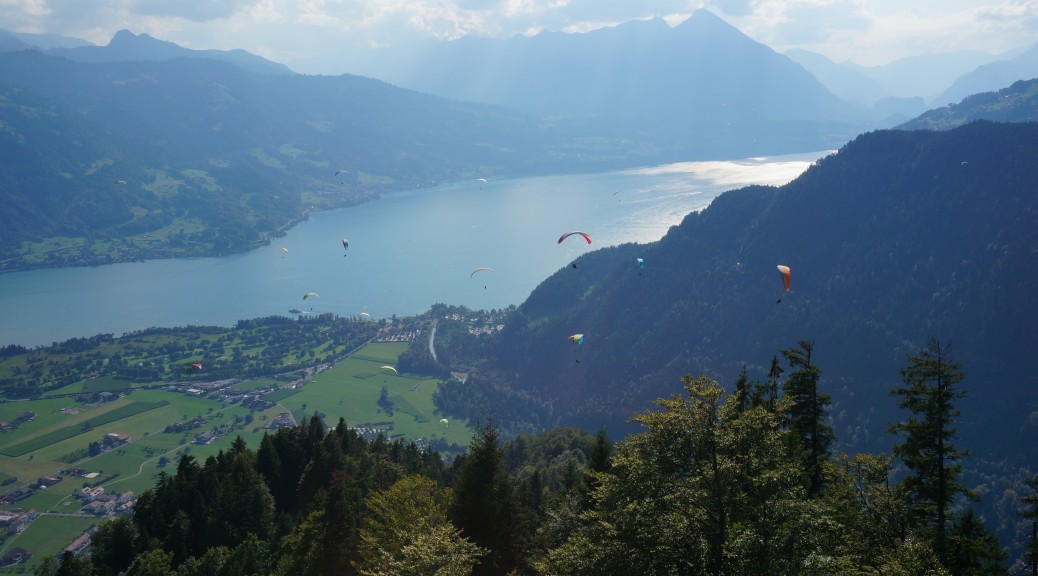 On Saturday August 22nd Melissa and I journeyed to the very scenic mountain town of Interlaken, Switzerland.  It had been a few weeks since we did a sight-seeing trip, so we thought it would be a great place to test out our new camera.  After a two hour train ride from our apartment, we stepped out of the Interlaken station to immediately see the glacier covered peaks of the Alps poking through a partly cloudy but still pure blue sky.  At ground level, challenging the sky’s dominion over the color blue, was the cloudy glacial water of the Aare river.  Needless to say, we took some great pictures… but with such landscapes almost any photographer or camera could take a great picture.

The town of Interlaken is geographically very appropriately named.  It is situated on the only piece of land in a long valley between the two lakes of Brienzersee and Thunersee.  Relatively nearby, up in the Alps, the river Aare starts, then flows through both lakes and the town before making its way to the Rhine.  It was along this river that we found a path to walk for a while… after getting over the views from the station.  Before we made it all the way to the Thunersee though, we decided to turn around because we were walking in the wrong direction from the other sight we wanted to see, a mountain overlook called Harder Klum.

Harder Klum is just north of the town, and accessible by a funicular railroad that travels from the base at 567m to the top at 1322m.  Walking to the funicular brought us through nearly the whole town of Interlaken, which came across as very touristy to me.  There were tour groups, horse drawn carriages, fancy boutiques, and English signs everywhere.  Also striking to me were the parachutists everywhere we looked in the sky.  I was a little worried the parachutists would take away from the natural beauty of the mountains in our photos, but looking through the photos at home, some of the shots with the parachutists turned out pretty epic.

The funicular brought us up right next to a restaurant with a big crowded look out area.  Before we went to the restaurant though, we saw a hiking trail go off and up higher in the woods.  We took this thinking maybe we could find a less crowded view, but after hiking maybe a mile we only found one small clearing with a view, and decided to turn around.  At the restaurant we were thirsty enough from our hike to order a couple beers and listen to the polka band.  And of course, we also spent some time on their lookout enjoying the view and taking pictures.

For dinner, we descended the mountain and found a restaurant in Interlaken that turned out to be American themed with a barbecue rib special and IPA style beers.  Around 7 p.m. we left for home, and unfortunately had such crowded trains we had to stand until Bern.

Our trip to Interlaken didn’t include a popular tourist attraction that we definitely want to check out before leaving Switzerland: Jungfraujoch, Europe’s highest railway station.  We hope that just means we will have to travel back again soon, maybe the next time we get visitors!

One thought on “Interlaken”