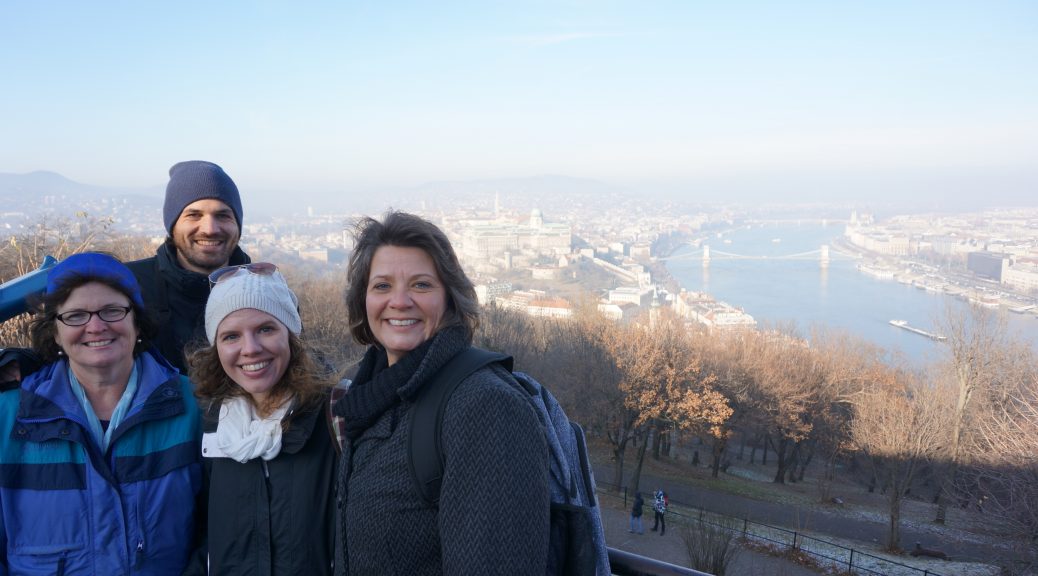 Because we’re Americans when we go on vacation we have to do and see it all.  On Friday December 9th that meant pushing ourselves to visit Budapest, Hungary.  This national capital is located about 150 miles, and about 2.5 hours away from Vienna. Knowing we had only a limited amount of time in the city, we hoped to hit all the highlights by riding around on a hop-on/hop-off sightseeing bus.

Our train out of Vienna left before 9 a.m. and arrived a little behind schedule around 11:30 a.m.  The ride through the countryside was again not very scenic because of thick fog. However, the fog began to clear as we approached Budapest, and happily we found perfect blue skies upon our arrival.

Before finding our tour bus I withdrew 30,000 Forint (the local currency) from an ATM.  It was funny to see the gigantic numbers on the bills, but 30,000 Forint isn’t that terribly much, equally only about $100.  We then walked to the bus and I spent most of the cash buying everyone’s tickets.

Our sightseeing bus was a double-decker which fortunately had its upper deck (were we sat) enclosed from the chilly outside temperatures.  As part of our ticket we received headphones that told us about all the sights we drove past, and other facts about Budapest’s history and culture.  It was interesting to learn that there are two main parts of the city:  Buda on the hilly west bank of the Danube river, and Pest on the flat east side.  These two parts were actually separate cities until 1873 when they joined, along with a third smaller city called Óbuda, to form Budapest.

The bus tour began on the Pest side, and took us along a wide avenue toward the river.  The neighborhood was filled with old looking buildings, but in fact most were built or restored since World War II when around 80% of Budapest’s buildings were damaged or destroyed.  We crossed the Danube on the Elisabeth bridge which is named after the Empress who was instrumental in granting Hungary equal status in the Austro-Hungarian Empire. Then we traveled a curvy route through the Buda side, that went first past The Chain Bridge, Budapest’s oldest bridge first opened in 1849, then up and around Castle hill, named for the grandiose Buda Castle perched atop it.

Our bus then climbed Gellért Hill where a fortress called The Citadella overlooks the city, and where we hopped off the bus for the first time.  Unbelievably, before we even got to see the view, we saw the same Canadian couple who were on the walking tour in Prague with us.  What are the odds… They said they were also going to Vienna, but we didn’t run into them again.

The views from the top, showing the whole city in a sweeping panorama, were amazing.  It turns out this was by design.  Unlike most forts, built for defense, the Citadella was built for attack. After Austria put down the Hungarian Revolution of 1848 they constructed the fort in 1851 as a place to fire down into Budapest if the city ever revolted again.  At the end of the fort nearest the river are three large bronze statues celebrating liberty.  We had a picnic lunch near the statues then made our way back to the bus stop. 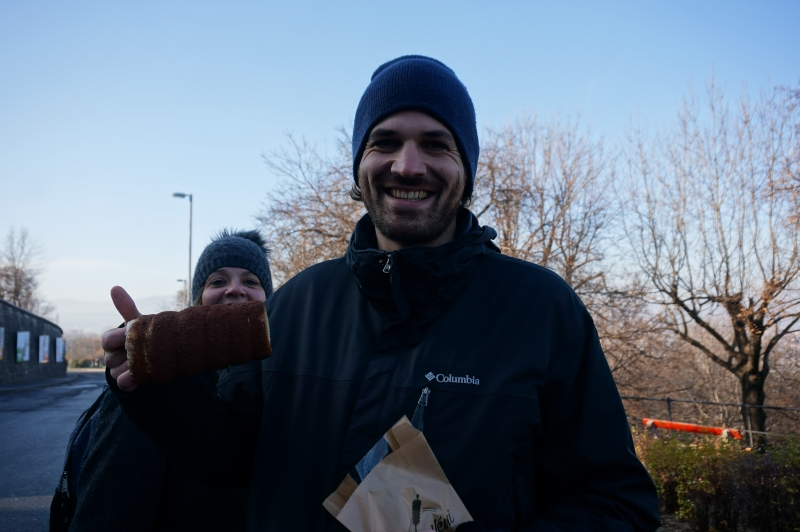 Just before boarding the bus we bought a delicious Hungary dessert called a chimney cake from a street stand.  This sugar covered pastry is made by wrapping dough over a cylinder then turning it over open fire.

After finding our bus we rode it down the hill, then across the river to the Pest side of the city, and eventually to St. Stephen’s Basilica where we hopped off.  In front of the church a large Christmas market was set up, but we stayed focused enough to check out the church first, before any shopping.  Inside of the church were ornate, colorful details everywhere we looked.  As European churches go it’s very young having been completed in 1905 after after 51 years of construction. 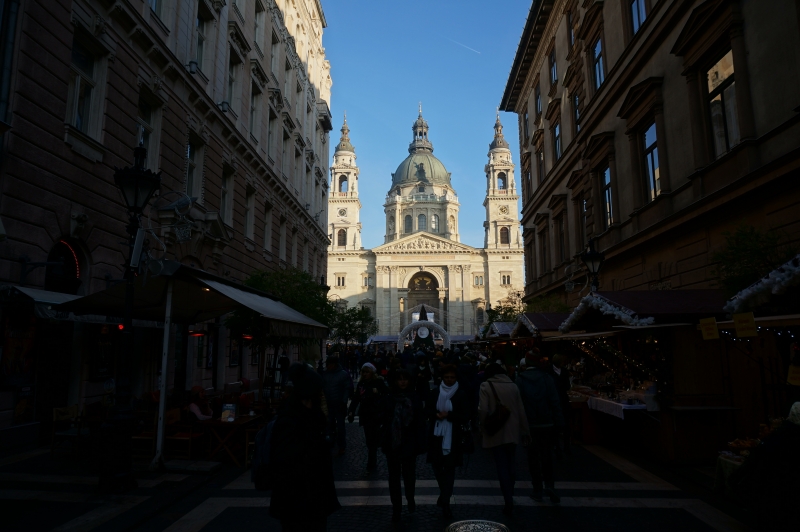 From the basilica we continued our tour on foot by first slowly making it through the Christmas market.  Janell found a souvenir mug to buy, and my mom a Christmas tree ornament.  Then we walked on to the Danube river and the Chain Bridge.  Even though the Chain Bridge is considered the oldest bridge in Budapest it was rebuilt (along with every other bridge in Budapest) after being destroyed in World War II.  It’s in its original style though and had a wide sidewalk for us to walk out onto it.  From the bridge we had cool views up to Buda Castle, and down to the Hungarian Parliament building built right next to the river bank.

On the bridge we noticed the sun getting close to the horizon.  We still wanted to finish out our bus tour, so we quickly walked back to the Basilica for one last bus ride.  Our bus this time was a double-decker without an enclosed roof.  Janell and Melissa were smart and sat on the lower level, but I wanted to take pictures on the cold upper deck, and my mom foolishly joined me.  We rode along a wide tree lined, and embassy lined boulevard called Andrássy Avenue, then came to Heroes’ Square. 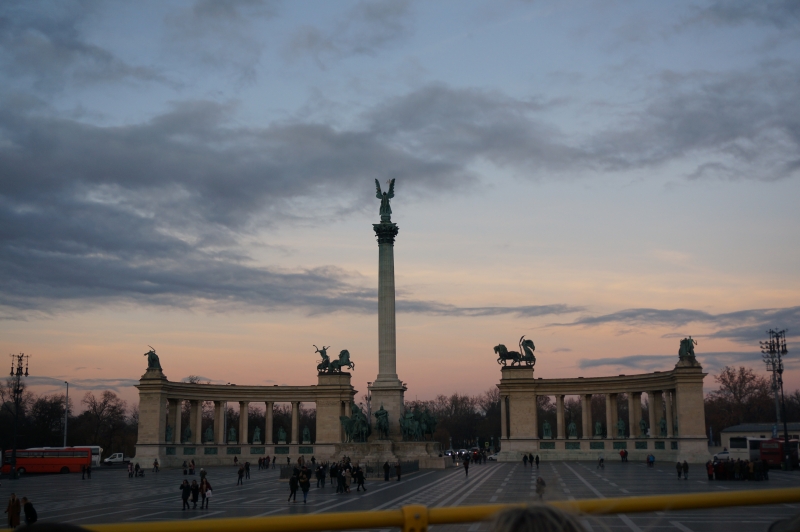 Heroes’ Square, as the name implies, is dedicated to the heroes of Hungary.  It is the site of the tomb of the unknown soldier, as well as the site of an iconic statue complex.  The tallest statue is of Archangel Gabriel standing on a column holding the Hungarian crown.  Below this are statues of the Seven Chieftains of the Magyars (Magyar is the Hungarian word for Hungarian).  In 895 A.D they migrated into Hungary with all their people, an event modern Hungary considers as its birth.  Before this migration historians trace the Hungarian people to central Asia.  This heritage is most evident today in the Hungarian language which is unusual for Europe in not being part of the Indo-European language family.

Also in the square are fourteen statues to famous Hungarians. The statues span King Stephan I, the first king of Hungary who died in 1038 A.D. all the way to Lajos Kossuth, a leader during the Hungarian Revolution, who died in 1894.  After the Square our bus soon arrived back at the train station where we had first caught it. We hopped off for the last time, then made our way to a train bound for Vienna.

On the train there was a little excitement with a family sitting near us that looked like Muslim refugees.  As we rode along our tickets were only checked once, but we watched multiple conductors walk by and talk to them.  About 20 minutes before we pulled into Vienna two plain clothes police officers flashed their badges to them, then once we were in Vienna they were led away by the police.

We ate a very late dinner of pasta at the apartment, and sipped on some store bought gluhwein before going to bed.  For our next day we didn’t have to travel far since we planned on sightseeing in Vienna…