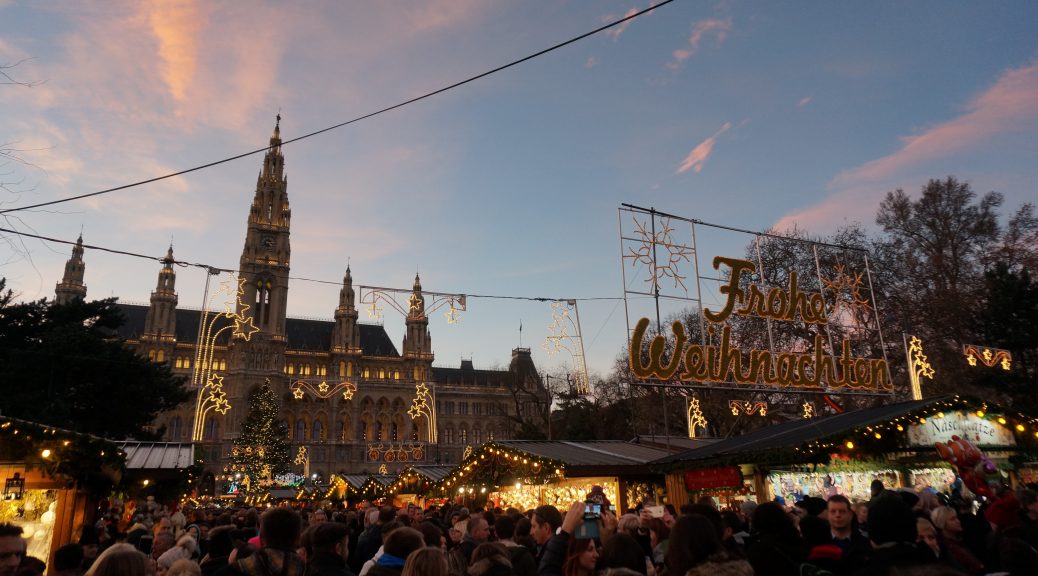 Despite arriving in Vienna on Wednesday, it wasn’t until Saturday that we decided to explore the city.  Our tour began with trips to two different palaces, then followed with an afternoon in the city center being guided around by native Austrians, and finished up with a hokey, yet fun and informative, trip through Vienna’s history at a tourist attraction called Time Travel Vienna.

In the morning my mother and I were up and ready to go before Melissa and Janell, so we went off without them to see the nearby Belvedere Palace.  As we walked the two blocks to the palace grounds, I was thankful we were going back to the apartment after our visit, because it was such a warm and sunny day I was actually getting hot with both layers of my winter coat. 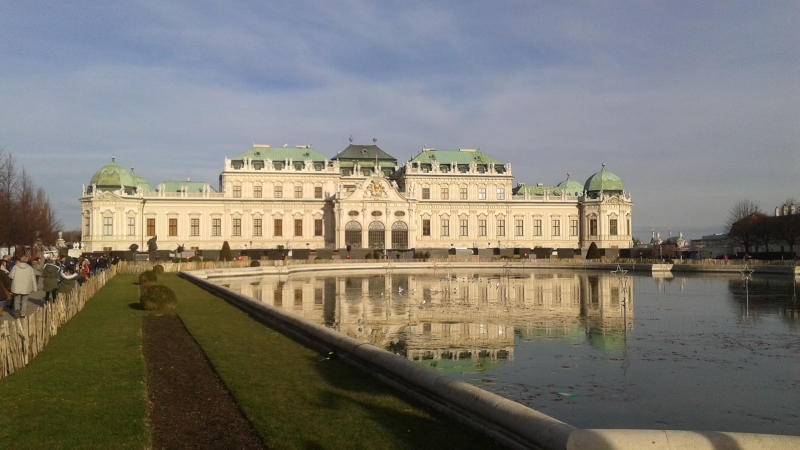 We came to the huge palace grounds from the north end, and were surprised to first see a memorial park filled with Russian writing. The park, which was built in 1945, was called, The Soviet War Memorial, and it was dedicated to the Soviets who died liberating Vienna during World War II.  An interesting bit of history is that after the war Austria, and the city of Vienna, were divided into Allied zones of control, the same way as Germany, and Berlin were. However, unlike Germany, Austria was able to kick out the foreign armies and unify much early, in 1955, with the signing of the Austrian State Treaty at the Upper Belvedere Palace.

After we walked through the gate into the palace gardens we learned there are multiple buildings in the palace complex.  The main ones being: the larger Upper Palace, the Lower Palace, the Palace Stables, and the Orangery (a building originally used to grow plants). The complex was developed in the early 1700’s by Prince Eugene of Savoy, who gained his wealth through being commander in chief of Austria’s Army.  Today the buildings are used as art museums.  My mom and I walked from the Lower Palace through the gardens waiting for spring,  past multiple fountains without water, until we reached the Upper Palace.  Being satisfied with seeing it all from the outside, we then made our way back to the apartment. 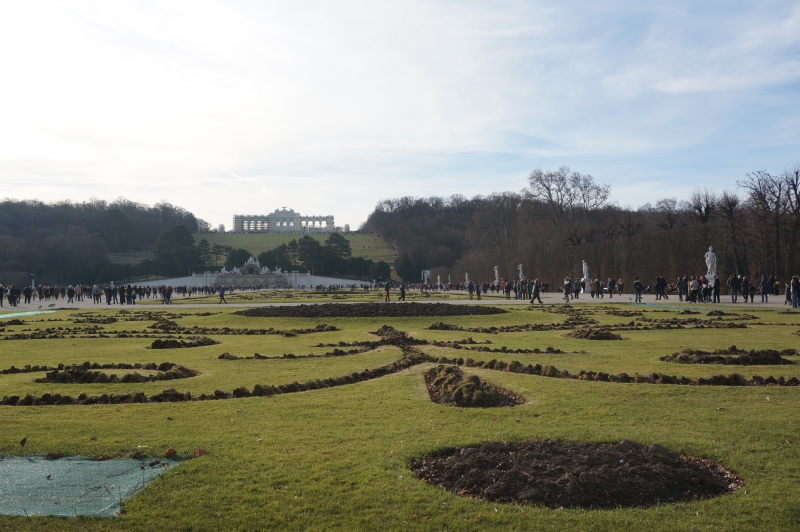 Around 10:30 a.m. all four of us left together to see the second palace of the day: Schönbrunn Palace.  Today this palace is surrounded by the city of Vienna, but during Austria’s monarchy it was the summer palace in the countryside.  We only had a limited amount of time until we planned to meet up with Sandy, so we skipped touring the inside.  Instead we went off right away to explore as much of the palace’s 400 acre gardens as we could.  It was interesting for me to see the grounds in winter looking slightly unkempt and barren, and also to see the fountains without their jets and with leaves clogging their pools, because it was such a contrast from the perfect order I had seen in July.
Just before noon we left the palace to make our way to the city center and our meeting with the Austrians.  Our subway brought us to Stephansplatz, the square considered to be the very center of Vienna.  We had a little time to kill, so we walked through a Christmas market set up around Vienna’s main cathedral, St. Stephan’s Cathedral, then, at 12:30 p.m., we found Sandy, her boyfriend Bob, and her mother Silvia waiting for us in front of the church.  They took us out for lunch where we ordered traditional Austrian food, wiener schnitzel for Janell and I and Gröstl (a hash dish with potatoes, vegetables, meat, and eggs) for Melissa and my mom.  Sandy surprised us by picking up the lunch tab, and then by giving us tickets to the Time Travel Vienna tourist attraction.
After lunch our tour guides took us on pretty much the same sightseeing route I had gone on with them in July.  They filled us in on all the history, and answered all the questions we could think of as we walked past the cathedral, past the nail tree, past the plague column, through St. Peter’s church, and into the Hofburg Palace. At the palace Silvia said goodbye to us, and the rest of us went on the palace tour. 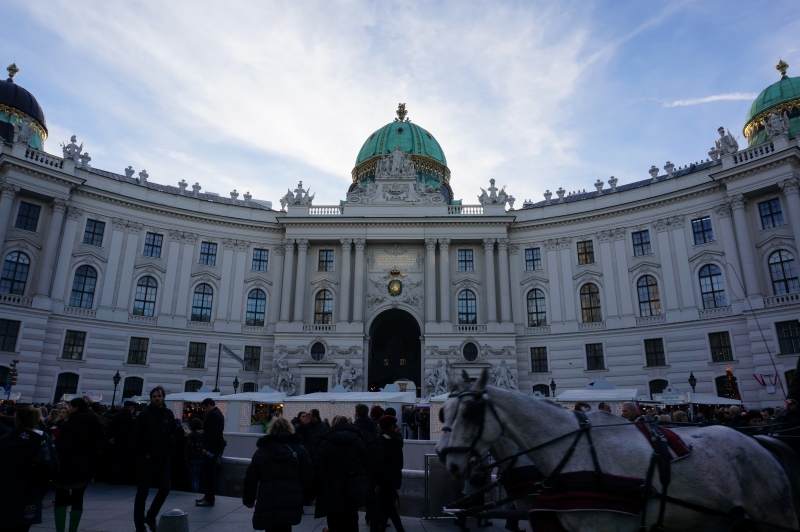 The Hofburg Palace was the primary residence for royalty during Austria’s monarchy.  Today part of it is still set aside for the president of Austria.  The tour tickets we bought included three sections: the Habsburg silver collection, a museum dedicated to Empress Elisabeth, and the imperial apartments.  We began with the silver collection which mostly consisted of rooms and rooms of silverware. The art of royal napkin folding was interesting to learn about, but to me the rest of the expensive place settings made me think the royals had more money than they knew what to do with.
We saw at least half of the rooms in the silver collection, then all decided to skip ahead to the Sisi museum, (named after Empress Elisabeth’s nickname).  I had seen both the Sisi museum and imperial apartments during my July visit, but a second visit let me pick up on a few more details, and refresh my memory.  I had forgotten about the Empress never cutting her hair, and taking three hours each day to wash and style it.  In the imperial apartments I picked up the tidbit that Emperor Franz Joseph’s brother was Emperor of Mexico for a few years before being executed by the Mexican citizens.
Since it was a refresher for me going through the museums, here’s a refresher to the summary I wrote about them previously:

Elisabeth was born a princess of Bavaria in 1837, and became the Empress of Austria when she married Franz Joseph I in 1854. She was a tragic figure, probably suffering from depression and other mental illness who died in 1898 by assassination in Geneva. The long reign of her husband, which ended in 1916, seems to be romanticized in Austria similar to the way the English romanticize the Victorian era.  It was fascinating to see so much history about a very famous person, who I had never heard of until entering the museum, and fascinating to learn she was assassinated at a Geneva pier I’ve walked by multiple times.

The next part of the tour, walking through the imperial apartments, took us through the living quarters, offices, and courtroom of the royal family.  I couldn’t help thinking that the long dead royals must be spinning in their graves with all the tourists wondering through and learning about their intimate lives. 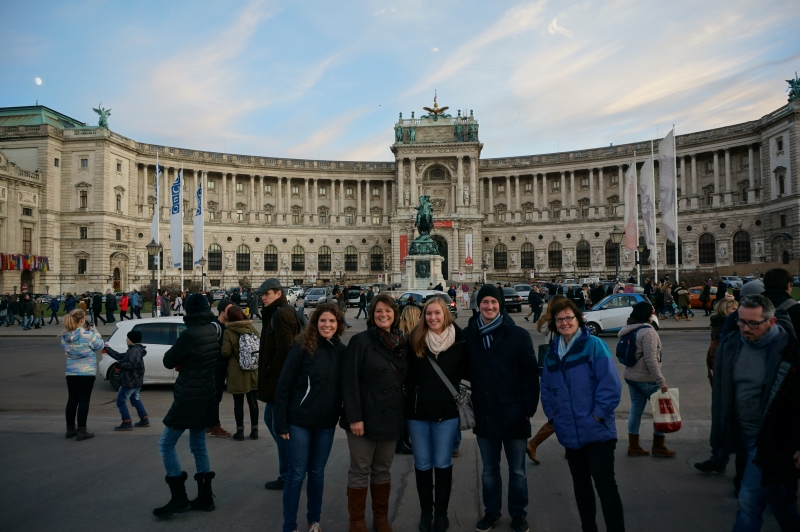 After touring the palace we walked past the it’s awe inspiring balcony.  Then our walking tour continued past Vienna’s museum quarter, past the Austrian parliament, and to the city hall (called the rathaus in German).  Vienna’s largest Christmas market was in front of the city hall.  It included a large skating rink, and very crowded aisles between the market booths.  Janell and Melissa jostled their way to a stand selling glühwein, and fortunately wanted to keep their mugs as souvenirs, so we were able to move on from the crowded market as they sipped their wine.

Our next destination was one of Vienna’s famous cafes to try some traditional Viennese deserts.  As we walked through the pedestrian only streets of the city center the sun set, which allowed us to notice all the beautiful light displays strung out along and over the streets. Once we were re-energized from our coffee and sweets, we left the cafe to see the Vienna State Opera building as our last sight.  Sandy and Bob then pointed us toward the Time Travel Vienna attraction and said auf wiedersehen. 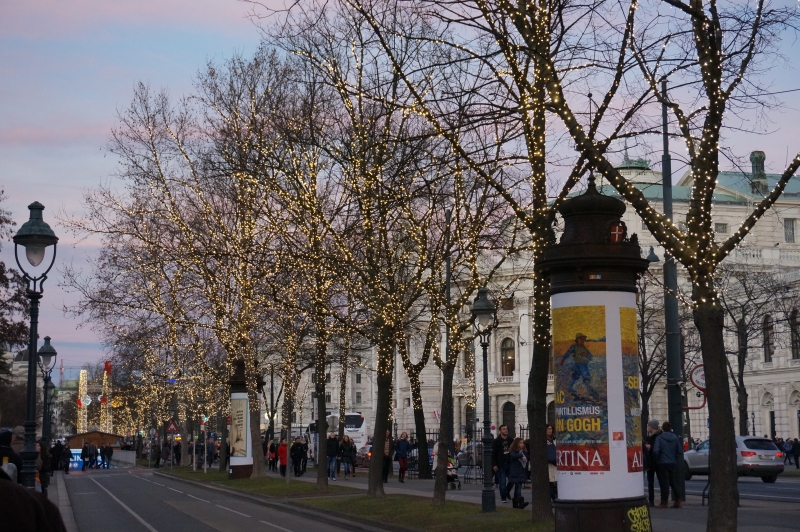 Time Travel Vienna was located right downtown in the basement of a building between the cathedral and Hofburg palace. The attraction takes the form of a tour with part of it guided by a human, and the other parts being… I think the best way I can describe it is to say, being different experiences.  To properly explain what the attraction is might take some of the fun out, so SPOILER ALERT ahead.

First our human guide led us into an old beer cellar where she showed us some paintings on the wall while talking about the history of Vienna.  Then she told us to stay put for a second while she went ahead to the next room to prepare the time machine. While she was gone the paintings, (which were monitors) came to life and told us about themselves.

The next room was the time machine.  It was like the mystery mine ride at camp snoopy. We each had a chair that moved as a screen played a movie tracking different events in Vienna’s history.  The most fun part about this section was that in addition to the seat moving, a blast of air blew on the back of our necks during a part when we were flying with pigeons, and a little rat tail whirled around and slapped the back of our legs during a part when we were following a group of rats.

The tour then continued with a part where animatronic, life-size, Habsburgs told us about their history.  After that we went to a room with an animatronic, life-size Mozart and Johann Strauss.   We then “Danced” the waltz by sitting in a turnstile that slowly moved to the “Blue Danube Waltz”.  Next was a simulated bomb shelter, with a simulated bombing raid, and then we finished up our “Time Travel” with a “carriage ride” through modern Vienna. All it all it was a great thing to do in Vienna that we would have never thought to do without Sandy.  We even got pictures at the end! 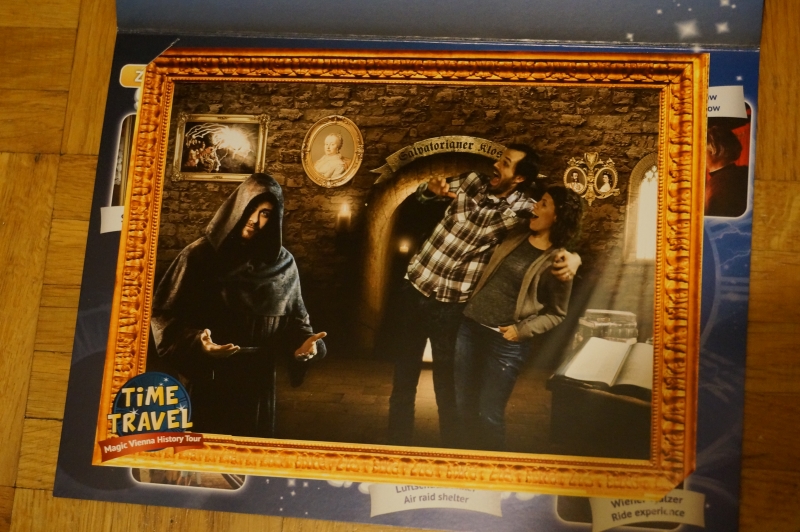 Before heading back to the apartment we grabbed one last glühwein at the Stephansplatz Christmas market.  It was hard to believe it was already our last night in Vienna, and that the next day we were going off to Salzburg…