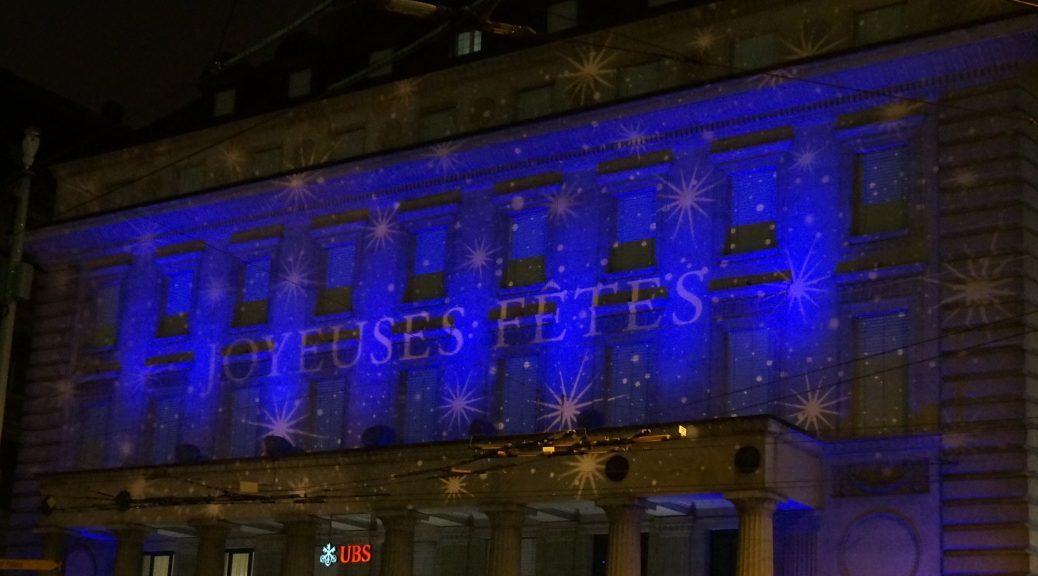 Christmas is a wonderful time of the year.  Especially for Melissa because she gets time off from work.  Since the holidays fell on weekends this year she got off the whole week after Christmas plus Monday January 2nd. 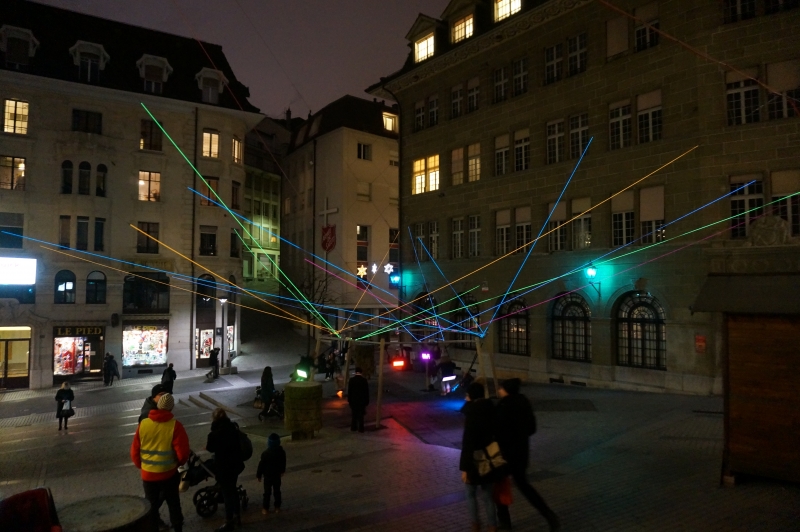 Our activities over the season began before her break, on Thursday December 22nd, when we spent the evening checking out Lausanne’s holiday lights. (See the album below). 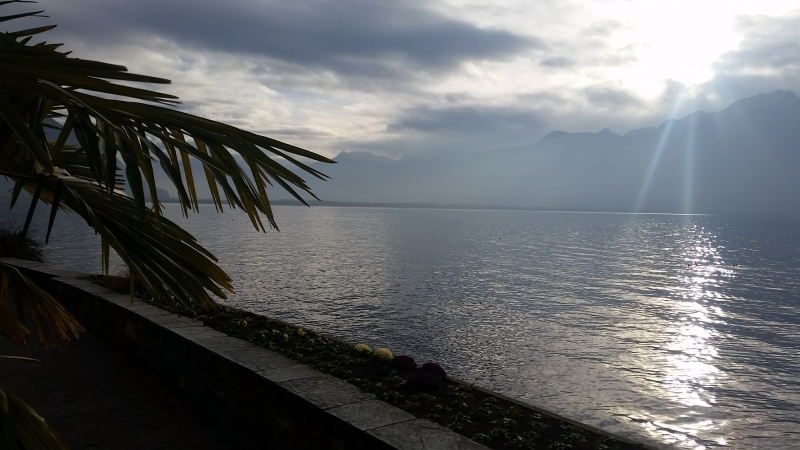 On Christmas Eve, while our friends and family were freezing in Minnesota, we went for a nice stroll amid the palm trees of Montreux’s lake walk.  In the evening we went to Mass in Lausanne, and had fun signing along to familiar Christmas carols, but with French lyrics.

On Christmas we didn’t have the most traditional meal (ribs and mashed potatoes), but it was delicious.  We made sure to call our families in the evening, and it was fun to have the phone passed around to talk to so many people.

The next day we woke up early and boarded a train for Davos, Switzerland.  You may have heard of Davos because of its annual Economic Forum, which attracts the richest and most powerful people in the world, but don’t worry! Melissa and I aren’t part of the Illuminati… yet.  The purpose of our trip was to get out of the house, and to use up a free hotel stay that Melissa gets each year with her credit card.

We enjoyed the view of Alps surrounding us from our room’s balcony, we swam in the hotel’s heated outdoor pool, and we dined on traditional dishes in the hotel’s restaurant.  We ate a surprisingly good soup called, hay soup, for dinner, then a main course of rösti for me, and capuns (a traditional leaf-wrapped dough and meat dish covered in cheese sauce) for Melissa. 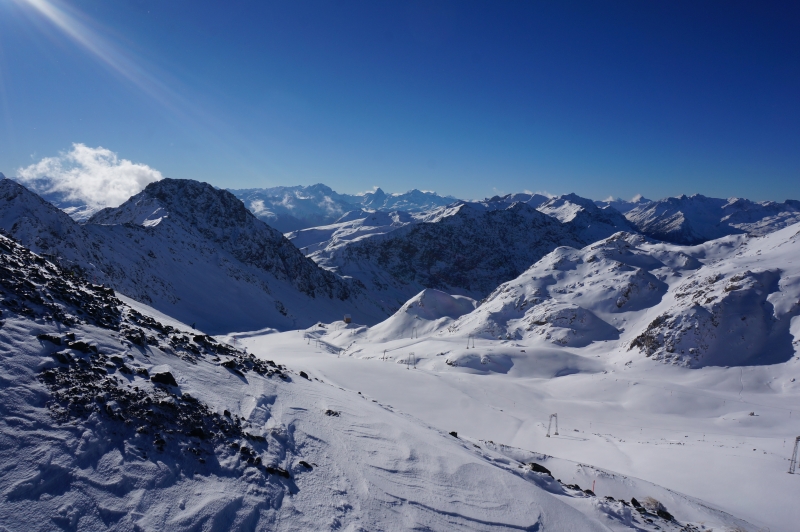 The next day we checked out of the hotel then made our way to the top of a nearby mountain called The Weissfluhjoch.  To reach the summit at 2693 m (8835 ft) we had to ride up two different funicular trains.  It was funny on the way up when we realized we were the only ones riding without skis.  At the top we were greeted with the kind of spectacular view we always find at the top of mountains.  We were also greeted with some brutal wind and cold temperatures that brought back memories of Minnesota winter. 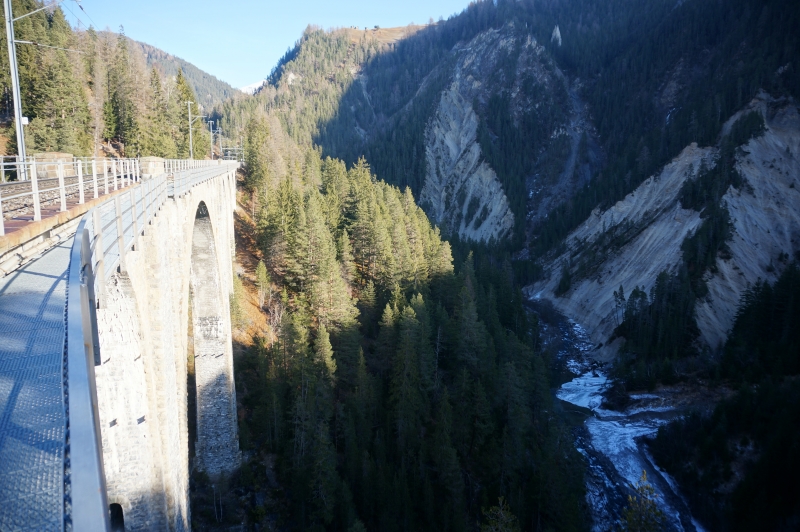 After we descended the mountain we began our train journey home. Along the way we made one quick stop to check out a deep canyon with an impressive bridge over it.  The bridge we checked out wasn’t originally built with a pedestrian path, so the path that exists now is just steel grate screwed into the side of the bridge. Needless to say walking across it was a little frightening, but we both made it over and back and were both glad we did.  The rest of the ride home was scenic, as Switzerland always is, but pretty uneventful.

Wednesday December 28th we began some serious Netflix binge watching, which continued through the day Thursday.  In the evening Thursday we finally left the apartment to go see an opera in Geneva.  The opera house was very unique because it was a temporary construction, built to be used while the permanent opera house is under renovation.   The opera we saw was “La bohème”, which tells the story of different artists living in nineteenth century Paris.  Even though all the singing was in Italian we could still follow along because the theater displayed both French and English translations above the stage.  It was the first trip to the opera for both Melissa and I, and what sticks out to me about the art form is how over dramatic the actors make each action.

The rest of the break we didn’t do a whole lot.  On New Year’s Eve we stayed home, and had fun watching the neighborhood come alive blowing horns and launching fireworks at midnight.  On Tuesday Melissa went back to work after a break well spent.

One thought on “Christmas Break 2016”