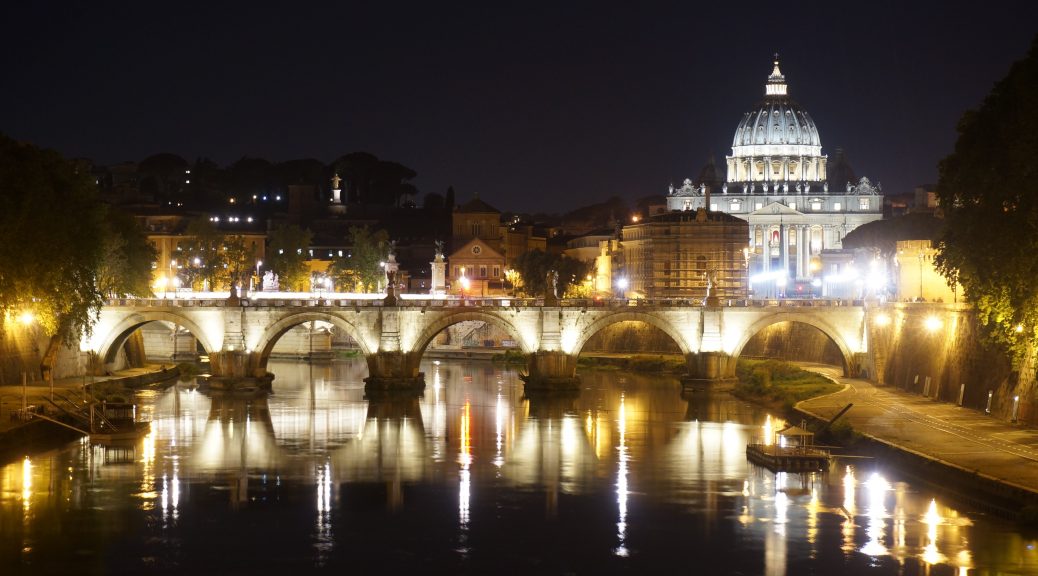 This year Melissa and I spent Easter with the pope… ok not with the pope, but at least in the same city as the pope.  Like most Europeans Melissa had Good Friday and Easter Monday off of work, and to take advantage of the four day weekend we headed south to the eternal city.  While in Rome we marveled at the Vatican, strolled through some ancient ruins, and even had the chance to take a couple Rick Steve’s guided tours (through downloadable recordings).

Our trip began at 7 a.m. Friday morning when we boarded our first train of the day.  It would have been faster to fly, but the busy travel weekend made train travel cheaper.  After chugging through the canton of Valais, we transferred trains in Brig, then rode through the 12 mile long Simplon Tunnel which took us under the Alps and into Italy.  In the Italian town of Domodossola we planned to make a quick transfer and catch a train to Milan, but it didn’t go as plan.  The Italians aren’t as efficient as the Swiss, and don’t label the departing platforms ahead of time.  So when we came into Domodossola we ended up hurrying to the wrong platform and watched the train we wanted leave the station. 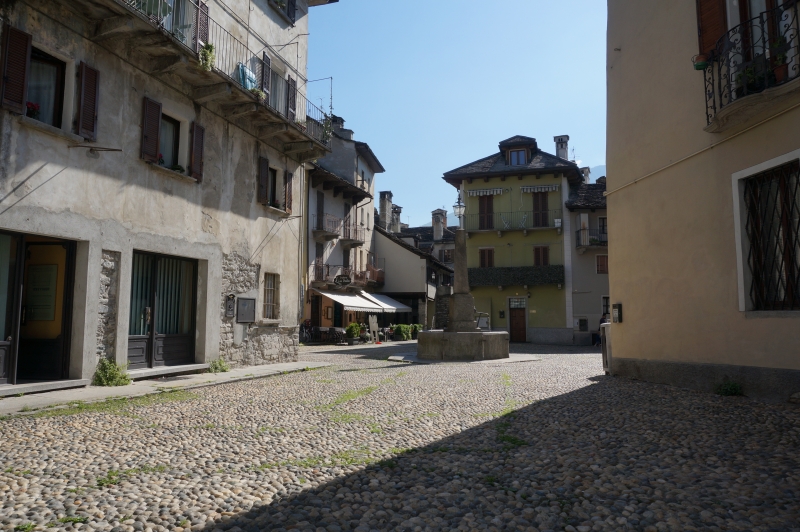 Since we had some time to kill in Domodossola, we went off exploring.  We meandered through the small old section of town, where remnants of the city walls were still visible, then we sat down at a cafe to relax over caffè americanos while looking at the Alps that surrounded us, and watching the locals walk by.  When we walked back to the train station we still had some time before our train to Milan, so we grabbed some sandwiches before boarding.

After a slow, crowded regional-train ride, we arrived in Milan, then at 3 p.m. we boarded our final train of the day: a high speed train direct to Rome.  At 6 p.m. we were finally done traveling.  We easily found our hotel across the street from the train station, then, after checking in, we set out for some evening sightseeing.

We first grabbed the subway that would take us to the neighborhood near the Vatican; we wanted to make sure we had our bearings so we wouldn’t get lost for our tour the next morning.  We then walked along streets laid out in a grid pattern, lined with relatively modern looking buildings, until we found a promising looking restaurant for dinner.  After dining on traditional Italian cuisine, including bruschetta, lasagna, meatballs, potatoes, and lemonchello, it was already dark out.  Our winding path back to the subway took us past Italy’s supreme court, along the Tiber river, where we had a nice view of St. Peter’s basilica, then to a street called Via del Corso. 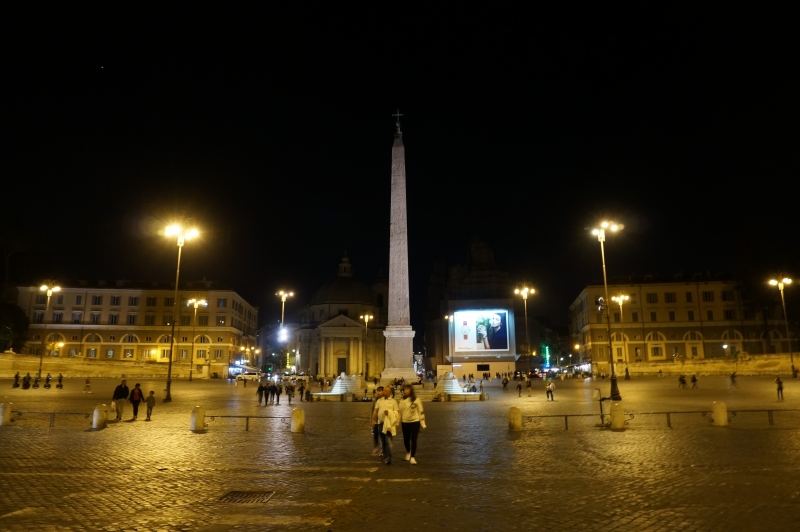 Via del Corso is one of the main through streets of old Rome.  It was still crowded with tourists late in the evening as we walked past high end stores, cafes, souvenir shops, and quite a few churches.  Eventually we came to a large square called Piazza del Popolo, where we saw the first of many obelisks in Rome.  Another first we experienced in the square was an aggressive and annoying person trying to sell us a rose. From the piazza, we grabbed the subway back to the hotel to rest up for the next busy day.

On Saturday we filled up on the hotel’s breakfast buffet, then we caught the same subway as the night before toward the Vatican. The guided tour we had booked was scheduled for 8 a.m., an hour before the Vatican is open to the general public.  After meeting our tour guide about a block away from the Vatican entrance, our tour group went off together to wait in line.  Even though only tour groups were allowed to entire before 9 a.m. it still took us about half an hour in line until we got in, our guide told us the poor souls without advanced tickets or tour groups would wait up to 4 hours in line.

Our tour included the Vatican museum, the Sistine Chapel, and St. Peter’s basilica.  Once through the security check point, our guide handed out earphones to everyone then lead us to a courtyard just before the museum entrance.  In the courtyard he described some of the art work we would see in the museum, then spent a long time explaining the artwork in the Sistine chapel, since no talking is allowed inside of it.  It was fascinating to learn about the extremely political subtext of the Sistine chapel’s paintings including colors and crest symbols of different Italian families spread throughout the biblical scenes to either represent them as good or evil,  Michelangelo showing men kissing in heaven, and a person he didn’t like in hell, as well as the latter addition of painted clothes to cover some of the nudity. 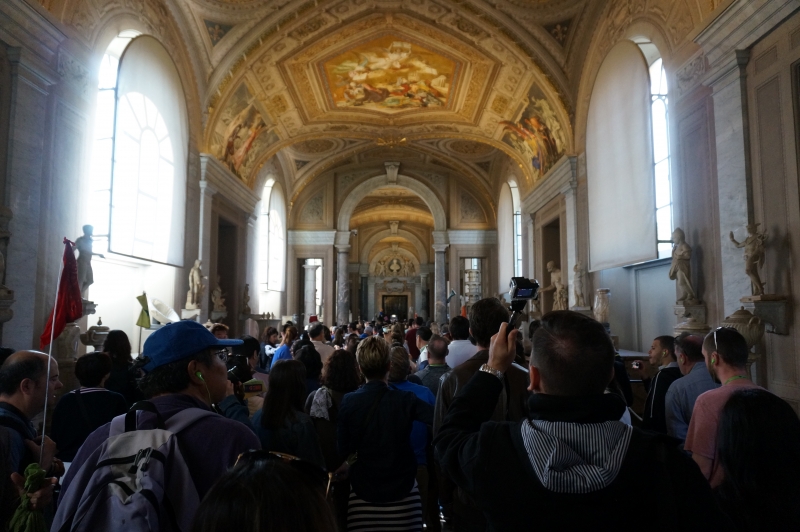 Because it was Easter, our tour of the Vatican museum was shoulder-to-shoulder packed.  We had no choice but to be pushed through the path set out for tour groups as our guide quickly rolled off facts about the pieces we passed.  In the museum we were completely surrounded by art; in addition to the paintings, sculptures, tapestries, and medieval maps, we also had to pay attention to the mosaics on the floors and paintings on the ceilings of every room we entered.  As we went along it was funny to watch the guide get upset at one member of our tour group who kept asking stupid questions, such as: how Jonah could survive in the belly of a whale, how they knew what all the ancient people looked like, or how it didn’t make sense for Jesus to be born from a virgin.

In the Sistine chapel some of the awe was taken away for me by the security guard loudly speaking “silence” in different languages into a microphone.  We stayed for about 10 minutes, observing it on our own, then we headed to St. Peter’s basilica.  The basilica, built directly over the spot believed to be St. Peter’s tomb, was also very crowded with the entire middle section roped off for Easter preparations. Just past the entrance into the church, our guide spent some time talking about the sights to see inside, then ended the tour by letting us walk through on our own. 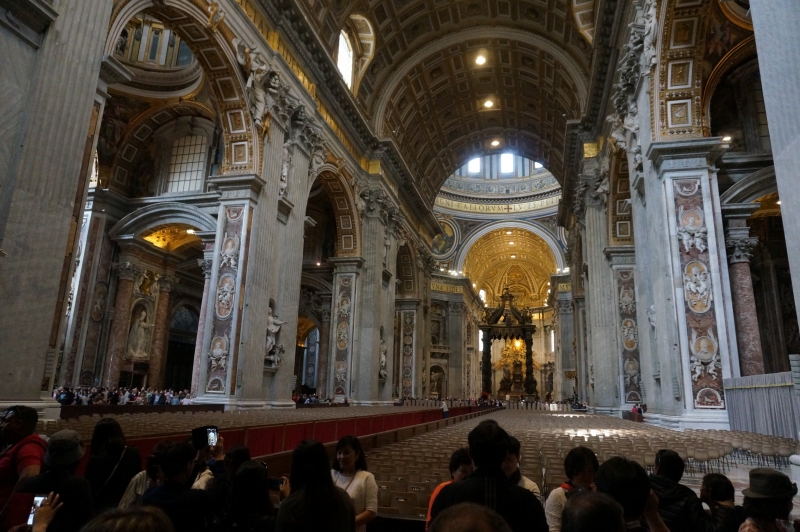 Exiting the church we were able to see some fellow Swiss people dressed up in their funny papal guard uniforms.  We spent a little time admiring St. Peter’s square, with its rows of statues looking down on it, and large obelisk.  We then took our time heading back to the hotel, stopping for lunch near the river, then walking past the large castle complex called Castel Sant’Angelo.

In the late afternoon we set out for more sightseeing.  While planning for this trip I discovered that Rick Steves has a phone app filled with free walking tours of many European cities.  Needless to say Melissa and I downloaded them all for Rome.  Rick’s most highly recommended tour for Rome was called the “Heart of Rome” walk.  With 68 minutes of audio, the tour took us through the heart of historic Rome over an approximate mile long path.  The main sights were fountains (including the famous Trevi fountain), obelisks, statues, and churches.  At the pantheon, which is currently a church, but was originally built as a temple to the gods,  we took a break from our heart of Rome tour to load up Rick’s Pantheon audio guide. With all the stopping it took almost two hours to reach the final stop of the tour at the Spanish steps. 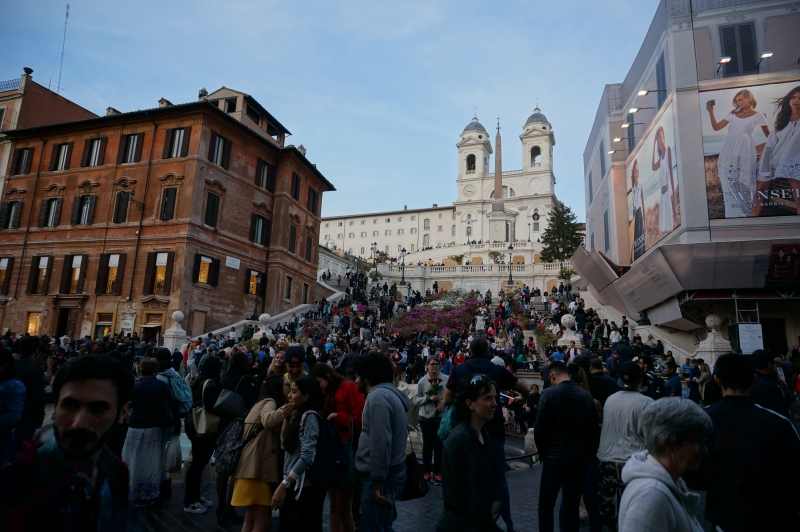 To reach the top of the Spanish Steps we rode an elevator, then we walked along the hill overlooking Rome while enjoying the wonderful sunset view.  When we had walked to overlooking the Piazza del Popolo we decided to make our way down from the hill, and easily found a great restaurant to end our day with pizza before taking the subway back to the hotel.

On Easter we saw the pope… on our hotel TV.  Then we left to sightsee some of Rome’s ancient ruins.  Lucky for us three of Rome’s popular ruin areas, the Coliseum, the Forum, and the Palatine hill are all connected.  We began with the Palatine hill, because I had heard the entrance line was shortest, but it still took about a half hour in line until we could enter.  At the ticket counter we bought a ticket that covered all three ruin areas. 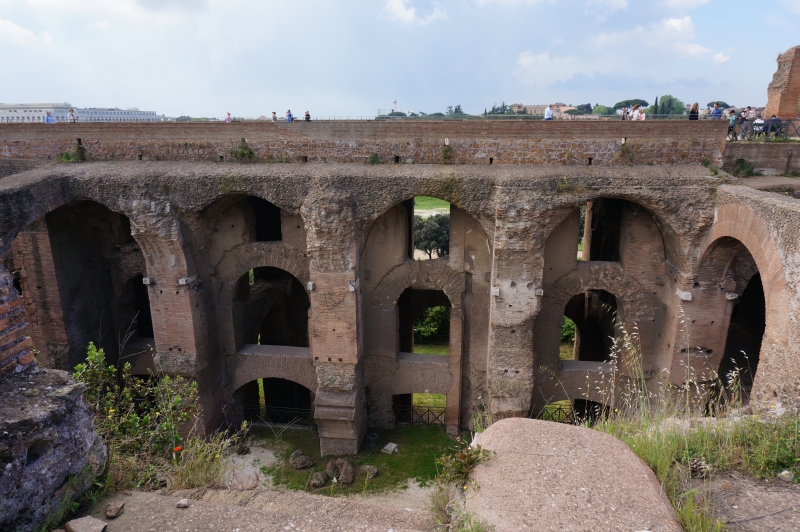 We walked around the Palatine Hill a little blind in our sightseeing, only have a one page map given to us with our tickets.  Still, it was fascinating to see all the crumbling multi-story structures that were thousands of years old, yet still strong enough to have tourists walk over them.  When we came to the Forum we had another Rick Steves audio guide to give us all the information.  It was interesting to learn that early churches were modeled after a basilica in the Forum, that much of the forum was buried until the 1800’s, as well as to see how advanced and expansive the Roman’s building was so many centuries ago.

From the Forum we next entered the Coliseum.  Even though we already bought our ticket we still had to wait a while in a line just for ticket holders.  Two levels of the sports arena were open to tourists, and as we wondered around we again had a Rick Steves audio guide to go over the highlights.  The thing that stuck with me most was just how brutal the Romans were.  Despite being the most advanced culture of their time in art, philosophy, and engineering the Roman’s still built the Coliseum.  The monument to human cruelty was where hundreds of thousands of people, and even more animals met their ends in horrendous ways all for entertainment. 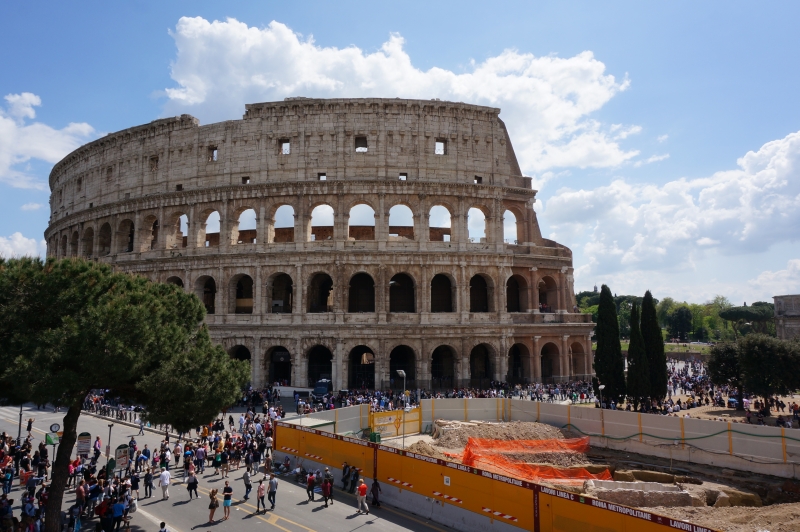 After all our wondering through ruins, we were exhausted.  Once we made it back to the hotel we didn’t feel like going out to see anything else.  For dinner we found a traditional looking restaurant near our hotel where we both ordered the prix fixe menu.  We had some nice bruschetta, some delicious carbonara, then the waiter brought out a bony looking meat dish…  I think it was roast ox tail.  It didn’t look that appetizing, but when in Rome we had to eat like the Romans.  Luckily, our next course was ice cream.

On Monday we pretty much just spend the whole day traveling back to Switzerland, taking the same route as Friday, but in reverse.  Even with a four day weekend there was a lot we missed in Rome, and lots that would be fun to see again.  It would definitely be worth going back!