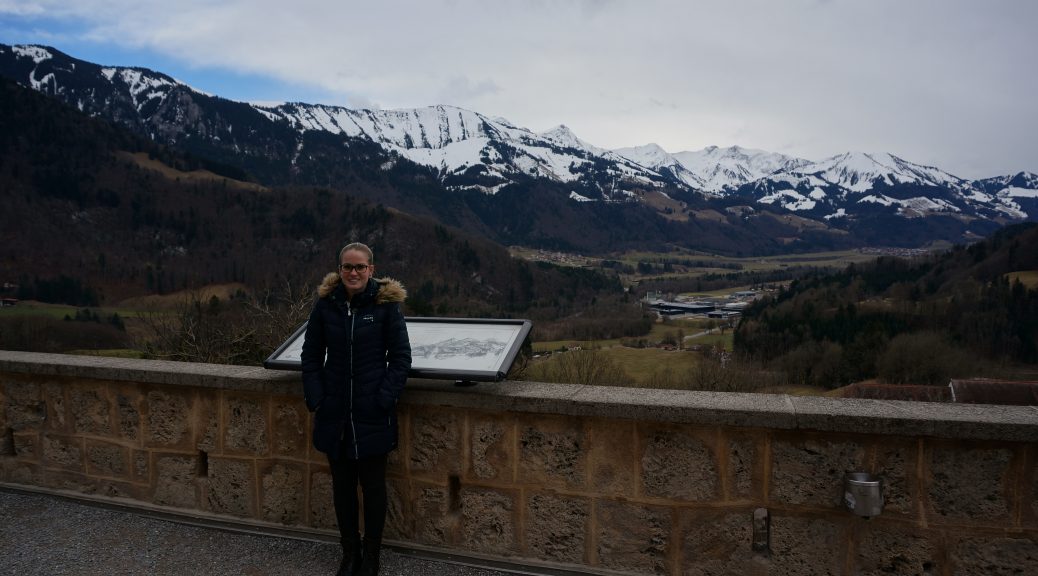 The last few months have been pretty quiet for us here in Switzerland, but over the first weekend of March we finally had a guest in our extra room again. From Thursday March 2nd until Monday March 6th Melissa and I got to put on our tour guide hats to show our friend Britt Sieber all the highlights of our adoptive country.  Our busy itinerary with her included cities, castles, the tops of mountains, and a chocolate factory.

Britt arrived in Lausanne Thursday afternoon after almost eight hours of train travel from her home in northern Germany.  After dropping her luggage off at the apartment she and I set off to sight see in the city.  Our first stop was the EPFL campus, where we met up with Melissa who was able to take a short break from work to lead us on a walking tour.  While she talked a little bit about the university we saw the oddly shaped Rolex Center and then found some coffee. 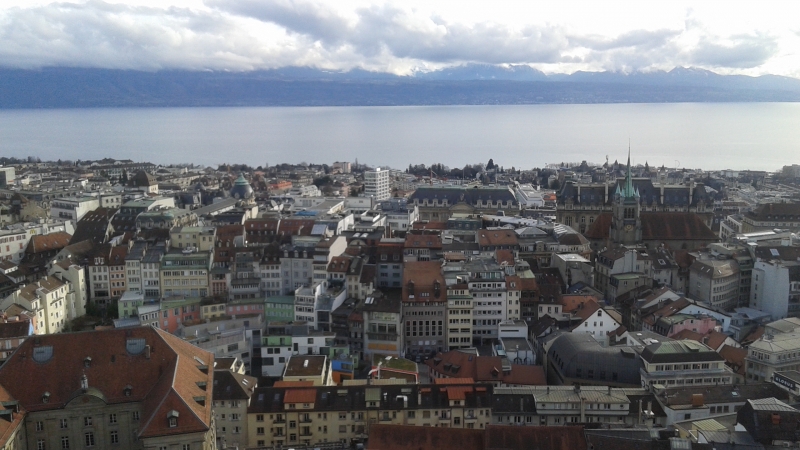 Melissa had to eventually get back to solving the world’s energy problems, so our tour continued without her into old town Lausanne.  Britt and I wondered through the narrow, twisting streets, up and down the many hills, until we came to the cathedral. Even though I’ve been to the cathedral numerous times, I’ve never climbed its tower, and since it was a nice clear day, it seemed like a good time to check it out.  For the admission price of five francs we had access to a long, centuries old, spiral staircase. Some of the stone stairs had been replaced, but some were so old that huge divots were formed where people step.  At the top we had a great view of the city, Lake Geneva, and both the Swiss and French Alps.

Once we climbed down from the tower, we quickly walked through the rest of the cathedral, then hopped on Lausanne’s number two metro line down to the lakefront.  After enjoying the views from the lakefront park our tour was over.  Britt and I made our way back to the apartment, where we waited for Melissa to come home from work.

For dinner we had local meats, and cheeses washed down with Swiss white wine.  Before bed we researched ski resorts and planned to wake up early the next day. 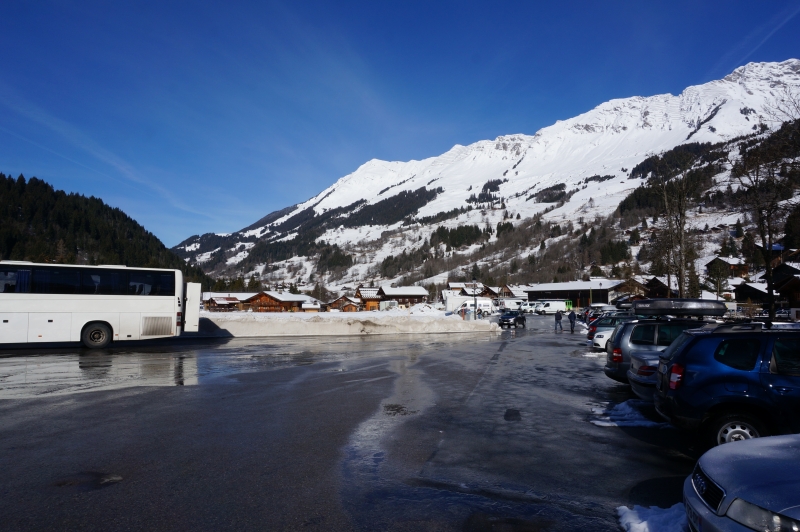 Friday morning we had a quick German breakfast of sandwiches, then all three of us rode a train into Lausanne.  Public transportation is really great in Switzerland, but for our plans we found out renting a car would actually be cheaper and give us more flexibility, so from the Lausanne train station we walked to a car rental office.  The ski resort town we picked out was called Les Diablerets, which was located about an hour away from Lausanne, and Melissa drove the whole way. The first half of the trip was easy freeway driving, but the second half had us go up a winding mountain road that barely fit two way traffic.

Once we found a parking lot in Les Diablerets, we next found a ski rental shop.  As we were talking to the rental person we unfortunately learned that the top of the mountain was closed due to an avalanche risk.  We were disappointed about missing the “Peak Walk”,  a tourist attraction suspension bridge at the top of the mountain, but the silver lining was that our lift ticket turned out to be cheaper.

We then found the gondola up, and when we exited it to the open ski area, I first noticed that it was filled with kids.  This was a good sign! It meant the hills should be easy.  In Switzerland the color coding for difficulty goes blue, red, black. and in our ski area most of the hills were blue.  Besides the one gondola up from the town, all the lifts in the ski area were the T-bar type where the lift pulls you up the hill while your skis stay on the ground.  I never crashed bad going down the ski slopes, but I did embarrassingly cross my skis once on the T-bar to crash on the way up the hill. 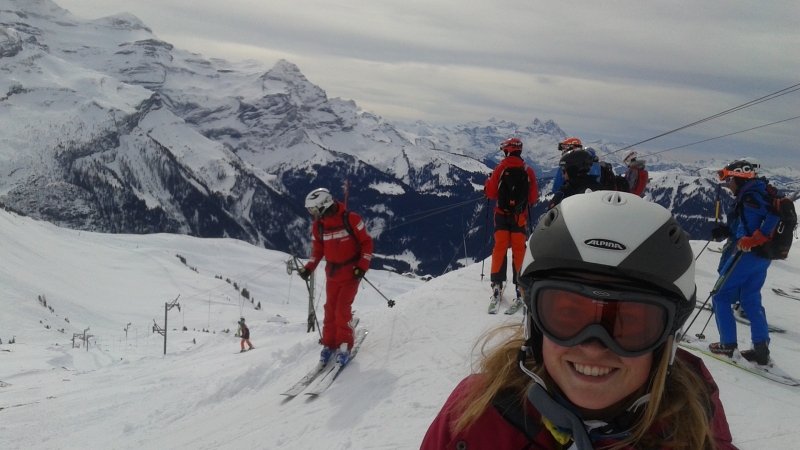 It was a beautiful, bright, sunny day as we skied, maybe a little too bright and sunny for me because I had dressed too warmly and was way too hot most of the time, but the nice weather gave us some great views. Britt was easily the best skier, and also had the most energy.  By the afternoon both Melissa and I would take turns alternating between skiing with her and resting at the chalet.  Our ski day ended around 3 p.m. when Melissa wiped out and twisted her knee.  Even though we didn’t know it at the time, it turns out our lift tickets also covered snowmobile rides (if you’re injured), so Melissa rode to the gondola where Britt and I met her to go back down to the car.

After a slurping down French onion soup for dinner back at the apartment, we relaxed with some beer and wine and planned for a busy Saturday. 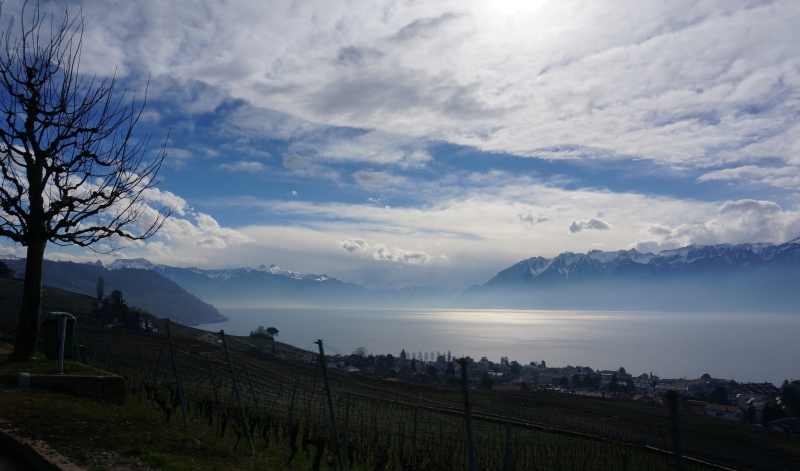 We were all a little stiff and slow moving Saturday morning, but still managed to get out the door by about 10 a.m.  Since we still had our rental car, we began our day by driving it to the wine terraces near Lausanne.  We parked in the town of Grandvaux, at the top of the terraces, then took a short hike to enjoy the view.   When we returned to the car, we continued our sightseeing by meandering it down to the eastern shore of the lake where we stopped at Chateau Chillon.

The thousand year old castle is one of our favorite places to bring visitors.  Melissa skipped out on the tour because of her sore knee, but I went with Britt, and even though it was at least my fourth tour I still found some new things to appreciate, like the paintings on the chapel ceiling, and some interactive displays, (probably meant for children), about medieval engineering. 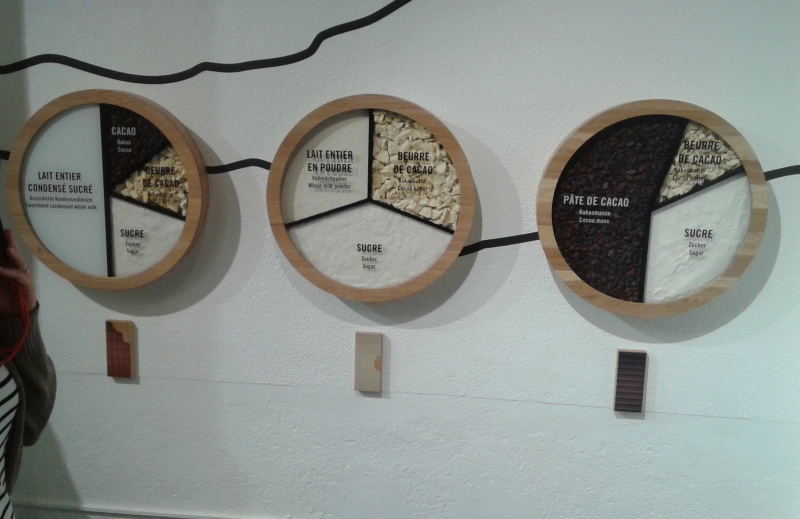 From the castle we next drove to the Cailler chocolate factory. Melissa’s knee wasn’t hurting her bad enough to miss out on the free chocolate samples, so all three of us took the tour.  The tour still had the hokey animatronics, and corporate propaganda, but the new thing I noticed this time was a display (shown above) that shows the different ingredients for making milk, white, and dark chocolate.

To burn off some of the calories from all the free samples, we next drove to the nearby, walled, hilltop town of Gruyères.  Melissa waited in the car while Britt and I climbed the long steep hill to the city walls.  Once we were inside we strolled through pedestrian-only, cobblestone streets that led us to the town’s castle.  We were satisfied with just checking out this castle from the outside, and as we walked around the castle grounds we enjoyed a far and wide view of the mountain valley.

When we made it back down to the car, we next set off for Bern, our final sightseeing stop of the day.  It took about an hour to reach the Swiss capital.  After parking the car we began our tour by walking to the old town.  Just as we reached the old town, we happily stumbled upon a large street festival.  Instead of cars on the streets, there were flamboyant costumed people, marching bands, and confetti. As we walked along we noticed periodically stands were set up in the street for the bands, and it looked like each band would play for a while then march to the next stand.

Britt figured out that the festival was called “Fasnacht”, and is a festival similar to Carnival or Mardi Gras.  Bern is historically a protestant city, so the fact that the festival is strangely celebrated after Ash Wednesday isn’t a problem.  For many Swiss citizens, the meaning of Fasnacht is no longer tied to Lenten season, but represents chasing out winter so that we can welcome spring. 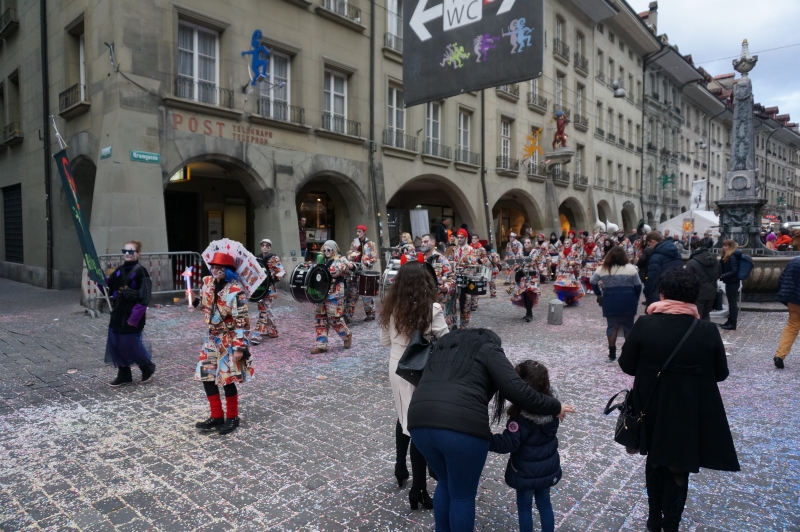 As it neared dinner time, it began to rain.  There were no open seats in the restaurant we wanted to eat at, and it was no fun standing outside, so we decided to go back home.  As Britt and Melissa relaxed in the apartment I had one more piece of work to do before the next day: to make Melissa a birthday cake. 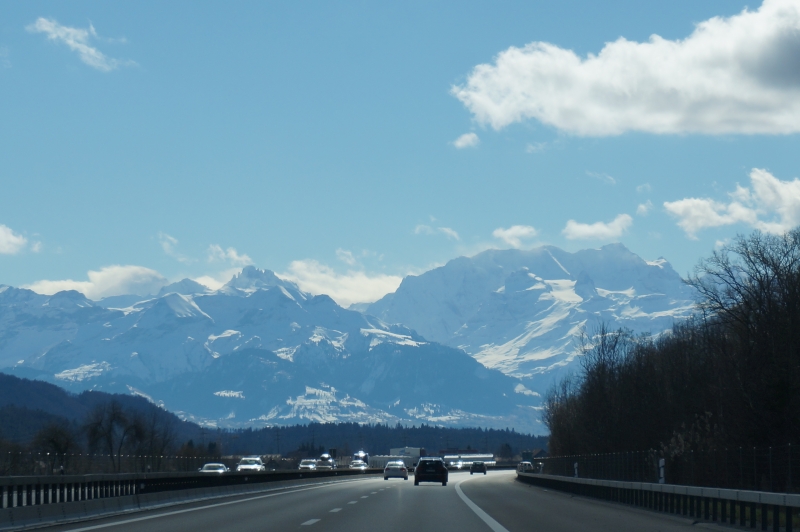 Sunday was Melissa’s thirtieth birthday.  Being still sore and limping from skiing, she started her new decade off truly feeling like an old lady.  After a breakfast of pancakes we loaded into the car to visit Interlaken, our only destination for the day.  The route to Interlaken became breathtakingly beautiful after the city of Bern.  For approximately 40 minutes we drove straight toward the gigantic, snow cover Alps towering in front of us.  Once we reached the Thunersee, one of Interlaken’s two lakes, the view interestingly changed.  We were then too close to see the tallest mountains, and they disappeared behind the foothills. 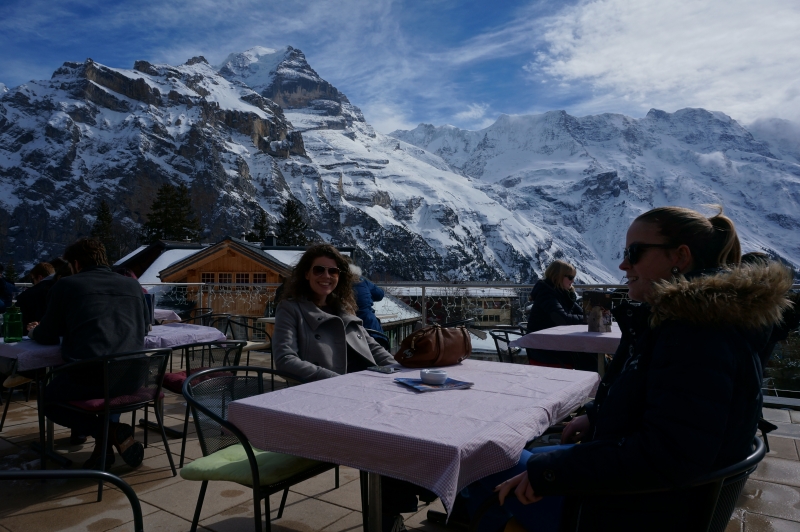 We were having so much fun driving, once we came to Interlaken we changed our plan to keep driving, specifically to check out the two mountain valleys near Interlaken.  We first drove up the Lauterbrunnen valley, and marveled at its sheer cliff edges dotted with waterfalls.  At the end of the road in the valley we parked our car at a gondola station. From the gondola station you could take a series of four gondolas to reach the top of a mountain, but we decided to just take two gondolas which would bring us to the town of Murren.  In Murren it was a little windy, and cold when the sun hid behind a cloud, but still we decided to have lunch on an outdoor patio to soak in the view.

Melissa had some good birthday luck, because the far and wide mountain views stayed all throughout lunch.  Then, just as we were walking back to take the gondola down, heavy clouds rolled in.  We still kept to our plan, driving next to the Grindelwald valley.  Once we came to the end of the road we only stopped for a few minutes at an overlook, then we had to get home to cook Melissa a birthday dinner.

Even though it was her birthday Melissa insisted on doing the cooking.  She made delicious American style barbecue ribs, and while they were in the oven we all sat down for a video call with her parents.  After dinner the three of us sipped on wine and discussed current events until we solved all the world’s problems.

The next day it was hard to believe how fast our time with Britt had gone.  I dropped the rental car off first thing after waking up, and when I came back to the apartment it was already time to say goodbye.  In German they say “Auf Wiedersehen” instead of goodbye, which loosely means “until we see each other again,” Britt reminded us multiple times over the weekend that we were welcome to visit her anytime, so we hope we will see each other again soon!

2 thoughts on “Switzerland with Britt”