It’s been nine months since we moved to Switzerland, and I still haven’t written a post about the reason we moved here in the first place… Melissa’s job.

Melissa works as a post doc researcher at the Federal Polytechnic University of Lausanne, in French, “École Polytechnique Fédérale de Lausanne” (EPFL).  EPFL is one of two universities in Switzerland run by the federal government, with the other being ETH in Zurich.  Both of these schools are consistently ranked among the best worldwide in science and engineering research, which is remarkable because almost all the other highest ranking schools are in the U.S.

A byproduct of almost all the best schools being in the U.S. is that the language of science is currently English.  This made it much easier for Melissa to look at jobs abroad, and eventually accept her current position.  Day to day, Melissa works in a research group with colleagues from seven different countries, most with English as their second language, but who all use English as the unifying language.  On the EPFL campus they teach upper level classes in English, and only occasionally has Melissa gotten into a situation where she needed to speak French on campus.

To get to work Melissa uses the same method as for all our travels: public transit.  It’s a short walk to the metro, a six minute ride, then a short walk to her office.  Depending on if she times the train perfectly it takes her between 20 and 30 minutes door to door.  There are no set hours for when she has to be at work, but she’s been pretty consistent, showing up around 8:30-9 a.m. and leaving around 6-6:30 p.m., while taking a half hour for lunch.

Besides wanting to go on a European adventure with her husband, Melissa also took the job because she thought the research was interesting, and it gave her a chance to learn a lot of new skills.  Her research is in the field of water-splitting, which is the process of using energy from sunlight, through the photovoltaic effect, to convert water into hydrogen and oxygen.  When Melissa took the position, she was told she’d be working on one project, but after a long visa wait, that project was started by a different post doc.  That was all fine though, because Switzerland has lots of money for research.  When Melissa finally started working, she instead started up a brand new project, researching a different class of materials for water-splitting applications.

Melissa is still leaning toward becoming a college professor someday, and the standard career path requires at least one or two stints as a post doc researcher before applying.  The post doc jobs are a way to learn new skills, work in different labs, and generally last between one to three years.  Her job here at EPFL is at a world renowned university, pays well, and is in Europe…who could ask for anything more? 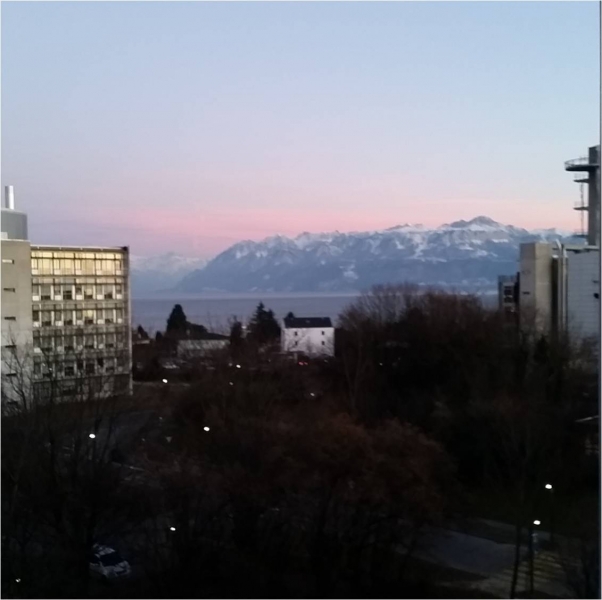 The view from Melissa’s office