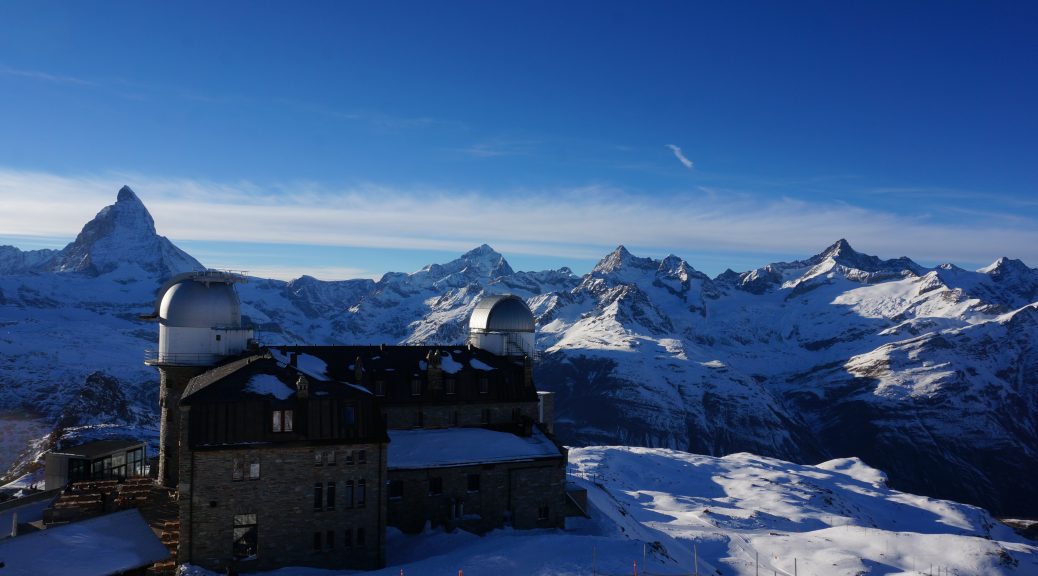 On Sunday January 29th Melissa and I took a mini vacation to one of the highest altitude hotels in the world: The Klum hotel atop the Gornergrat mountain.

The journey to the hotel required riding three different trains.  Our first leg took us past Lake Geneva and through the scenic mountain canton of Valais until the town of Visp.  In Visp, at an altitude of 658 m (2159 ft), we transferred to a private train that took us up a narrow mountain valley, past the end of the road for cars, to the town of Zermatt at an altitude of 1608 m (5276 ft).  In total it took just a little over three hours to reach Zermatt. 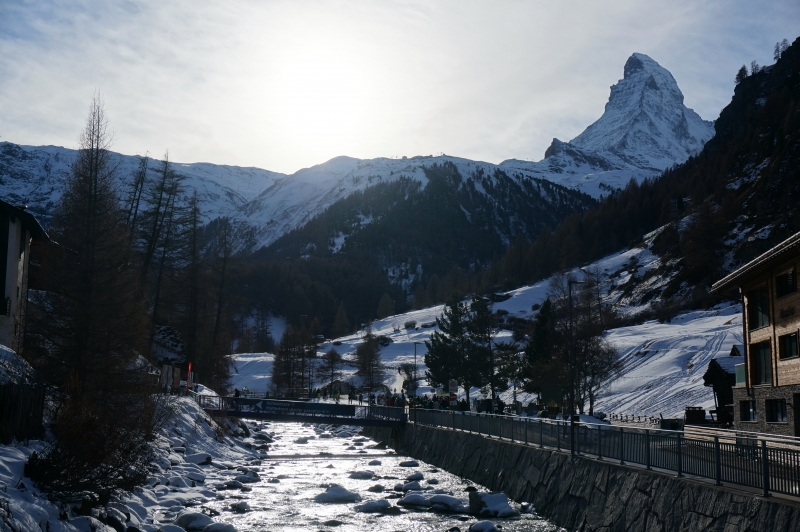 Once in Zermatt we spend a little time walking around and enjoying the mountain views.  The most spectacular sight is Switzerland’s most famous mountain, The Matterhorn, which rises prominently in view everywhere in the town.  In addition to the nature views it was also fun to take in the busy resort town bustling with fur clad tourists, skiers walking awkwardly in their boots, and small electric cars zipping around.  At about 4:30 p.m. we made our way back to the train station to catch our final train, which would take us up to the Gornergrat railway station at 3090 m (10140 ft).

The train ascending the mountain took about forty minutes to reach the top.  Along the way the views out the windows got better and better as we rose above the tree line and were able to see the summits of all the surrounding glacier covered Alps.  It was a beautiful blue sky day at the top, so we took some time marveling at the views before checking into the hotel.  The hotel is a short walk uphill from the train station, and farther up the path from the hotel is the actual summit of the Gornergrat at 3135 m (10285 ft) which gave us the best views. 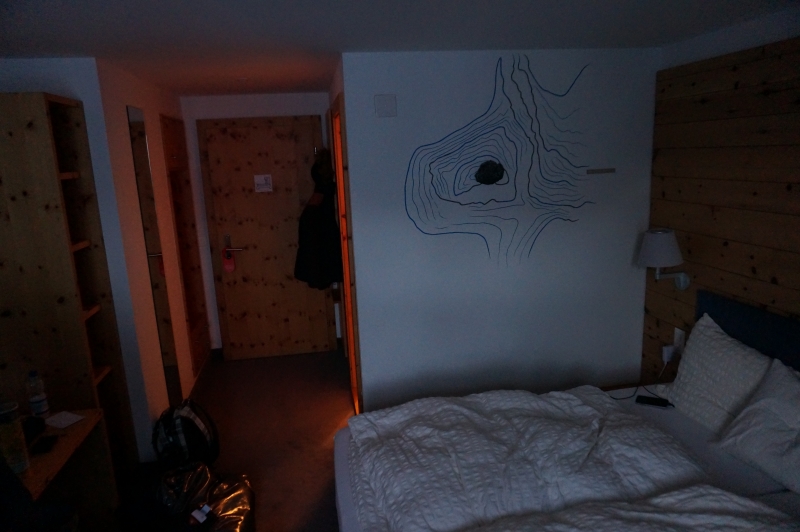 At the hotel we found out that each room is named after a nearby mountain peak, and to up the extravagance, each room is decorated with a rock plucked from the top of its namesake mountain.  After warming up, and settling in to our room, we made one more trip to the Gornergrat summit for twilight pictures, then came back for dinner served by the hotel.  Because the train stops running in the evening, we were completely cut off from civilization, and had only the hotel restaurant as a place to eat. Fortunately the hotel knows this, and dinner and breakfast were included in our hotel price.

After a four course dinner, that included a salad buffet, white wine soup, roast beef, and pina colada mousse for dessert, we were stuffed.  We hung out in our room until about 10:30 p.m., at which time we figured there would be no trace of sunlight left, and then we bundled up to hike up to the summit for some star gazing.  The hotel also functions as an observatory, but unfortunately the telescopes weren’t open to regular hotel guests. 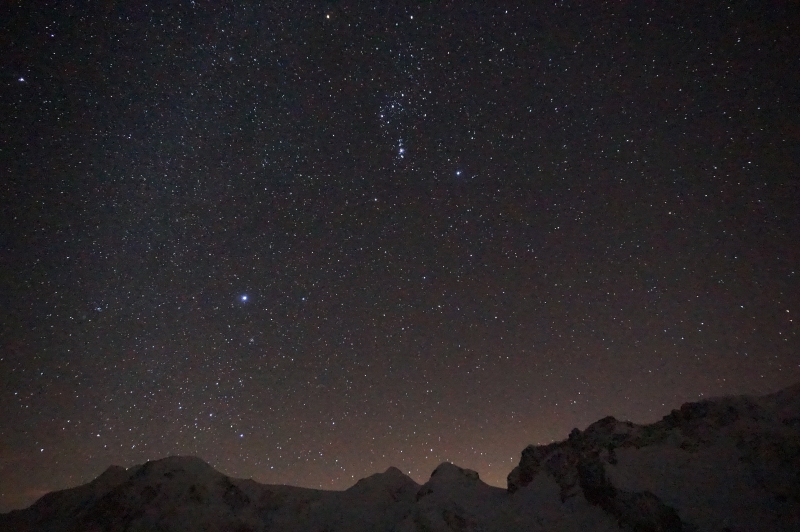 At the top it was cold, still, and dark.  Scattered about the mountains surrounding us we could see dim headlights of snow groomers making there way along ski trails, and just barely make out the hum of their engines.  Above us we were greeted with the most stars I’ve ever seen in my life.  There were so many it was a little hard to pick out the constellations amid the noise (the above picture has Orion in the top center).  Melissa took a couple okay pictures, but I don’t think they quite capture the scene. Serendipitously, Vox just wrote an article about light pollution featuring pictures of Orion which I think features some cool pictures.  I have the link here.

Neither Melissa nor I slept great Sunday night, and we’re blaming it on the altitude.  In the morning we ate our hotel breakfast, which included a continental buffet, as well as the option to order a couple different dishes from the kitchen; Melissa and I both had omelets.  It was a little cloudy Monday morning, so we didn’t feel like we needed to take in any more views.  After breakfast we checked out, and took one of the first trains down the mountain, and from there made it back our apartment the same way we had come.