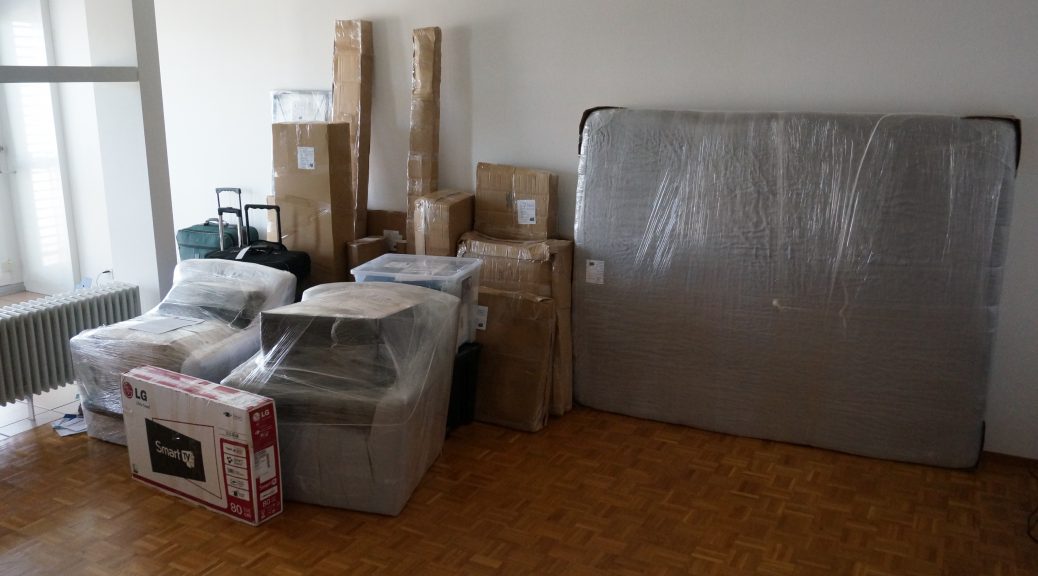 After two and a half years of soaking in the European lifestyle our time in Switzerland has come to an end.  Coincidentally, on the anniversary of America’s birth, Melissa and I stepped off a plane in Minneapolis for our own new beginning.  The next chapter of our lives will be in Washington D.C., where Melissa starts a job with the National Science Foundation on September 5th, and I’ll be looking to get back into the engineering field.  While waiting for Melissa to start her job, we hung out with our friends and family in Minnesota, adjusted to the American lifestyle again, and tried to relax and recover from all the stress of our international move.  In this post I’m going to write about all the steps it took to wind down our lives in Switzerland.

Our biggest concern, once Melissa decided to accept her new job, was getting out of our apartment lease.  Like most leases in Switzerland, our lease term was five years.  However, we were allowed to quit the lease earlier if we gave the rental company four months notice.  Because of the uncertainties of federal hiring, though, we were only able to give our rental company two months notice.  This meant our only option to avoid paying the extra two month’s rent was to find new renters to take over our lease.

All by ourselves we researched the different Swiss websites that advertise apartments, then, once we had a good idea of what other listings included for pictures and French keywords, we posted our listing on a website called anibis.ch, and also on a message board through EPFL.  There was an option to pay a small fee and have our listing get more views, but we decided to first see how it would do as a free advertisement.  The free ads seemed visible enough to me, because within the first few days of posting it I was already getting numerous emails and calls from interested people. 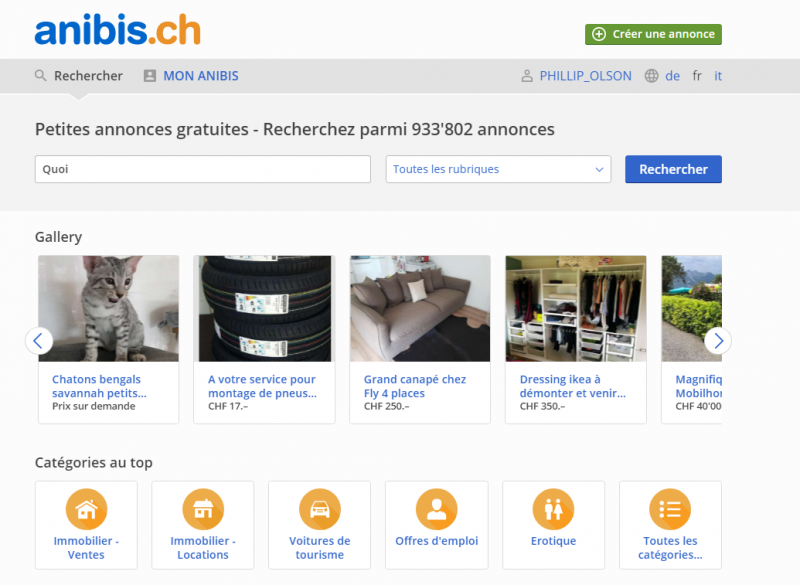 Most of the people interested in the apartment were able to speak English with me, but a few decided to muddle through in French with me.  After all my time in Switzerland I’m still far from fluent in French, but I’m proud of making it through this last language challenge of setting up meeting times over the phone, and, when the people came to view the apartment, of being able to show them around, and answer their questions in French.  After a week of answering phone calls and showing off the apartment, I called the management company to see if anyone had been approved to take over our lease.  The way things work in Switzerland is that I handed out rental applications to the people that came to look at our apartment, and then the final say of who would take over the lease was up to the management company.  Surprisingly the rental company said they hadn’t received any applications yet.  Once I thought about it for a while though, I remembered how difficult it was to obtain all the documents needed to apply for an apartment, and I felt a little more hopeful that someone would eventually take over our lease.

While we were anxiously awaiting good news from our apartment management company, we moved onto the task of figuring out what to do with all the furniture, dishes, clothes, and other miscellaneous items crammed into our apartment.  Our cheapest option, which would require us to sell, give away, or throw away as many of our largest, heaviest things as possible, still left us with seven or eight checked suitcases worth of stuff to move.  In addition to the baggage fees, and the logistics of moving those suitcases to the airport, we also started to worry about how difficult it would be to sell all our things.  Because of Switzerland’s strict garbage laws, if we were unable to sell something and it couldn’t fit in a garbage bag, we’d be responsible for taking it to the landfill two towns over and then paying a disposal fee.  Plus, if we sold most of our furniture, we also had to think about the extra hassle this would cause us in America when we needed to furnish a new apartment.

So we quickly started researching the option of bulk shipping our things by container ship.  Considering how this option would make our lives easier, we settled on a reasonably priced company that gave us door to door service.  It’s interesting to note that the company charged by the volume instead of weight for the items shipped.  We choose a 200 cubic feet option, which looked a lot smaller when I taped it out onto one of our walls, but since most of our things were from Ikea they packed up very tightly.  A couple days after we loaded our 26 homemade boxes into the movers van, the moving company got back us to say that we only had 140 cubic feet of stuff. 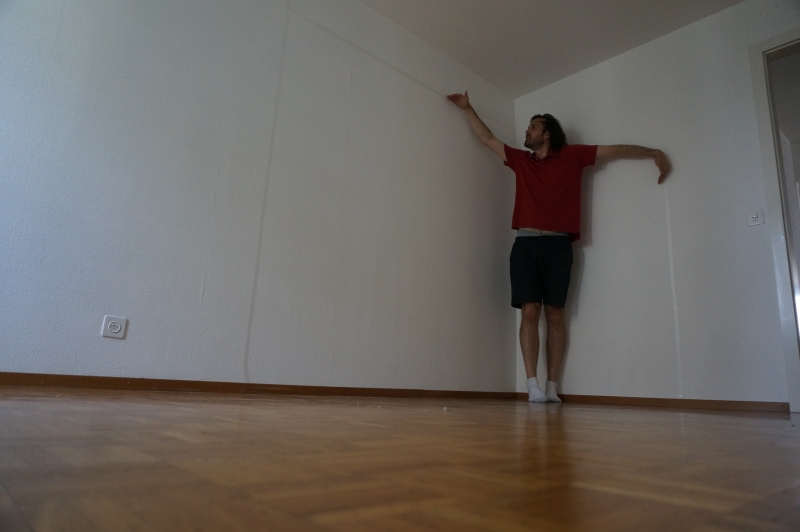 Even though we settled on the shipping container, we still ended up selling, giving away, or throwing away a lot of stuff.  To sell things we again used anibis.ch, and I mostly had good luck getting rid of the few large pieces of furniture we didn’t want, so long as I set the price at about half of what we paid for them.  Through the website we sold our kitchen table, desk, office chair, extra bed, television, and sectional sofa.  The two sales worth remembering were the television and the sofa.  With the television, it was memorable because it took me until the twelfth different offer email to find a buyer, (I sold all the other items to the first or second person to contact me).  I had set the price at 125 francs, and every single person wanted to negotiate.  I kept telling all the people I was waiting to see if someone would offer me full price, but as time drug on I eventually gave up and sold it for 100 francs.

What made the sofa sale memorable was how my buyer moved it.  Just hours after I posted the advertisement, I received a call from someone saying they were very interested, but first they had to see if it would fit in their car.  I told them that it can be taken apart into pieces, and they agreed to come check it out the next day.  When they pulled up in a small two door hatch back car I thought there’d be no way they could get it.  However, to my amazement they pushed the seats forward and shimmied the largest piece in first.  All told it took them three trips to get all the pieces. 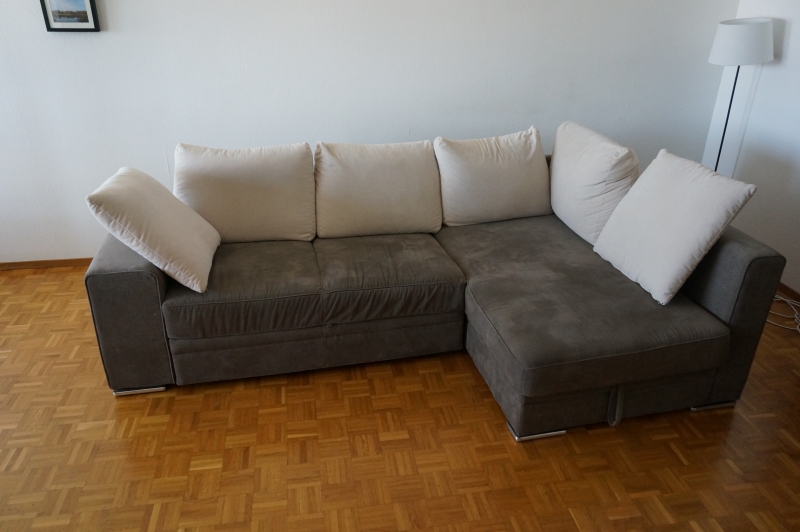 In the midst of all our packing and selling—just a week and a half before our departure—we got word that a couple had agreed to take over our lease.  Melissa and I were very relieved to say the least.  We were also relieved to hear from the future renters that they would buy a couple pieces of our furniture that no one was interested in online.  Initially we sold them two rugs, and our armoire, but then as we cleaned up and our move out day came closer, we kept finding more things.  Faced with the problem of figuring out how to throw these things away, we asked them if they’d take our bedroom mirror, bathroom towel rack, end tables, kitchen shelves, espresso maker, coffee grinder, printer, lamps, and light fixtures all for free.  Fortunately for us, they did.

Soon our last week in Switzerland was upon us.  We had the moving company scheduled to pick up our boxes for the container ship on Wednesday June 28th, and our management company scheduled for the move-out walk through on Thursday June 29th.  While we began a deep clean of the apartment, we also had to make sure all our services and utilities were canceled.  The only truly foreign thing for us Americans was that we had to notify our commune (village) that we were moving.  Canceling our internet, cell phones, electricity, health insurance, and bank account were all simply done by phone calls, online forms, or sending letters through the mail.  Since we were moving back to the land of the free, we also made sure to buy some short term medical insurance to cover us until Melissa would start her job.

With our cleaning it was amazing how much stuff we found to throw away.  In Switzerland we have to pay 2 francs per garbage bag, so it hurt a little as we racked up over 10 full garbage bags of trash.  The morning of our move out we woke up on an air mattress, because our bed was shipped the day before, then I cut the large mattress in half with a scissor and stuffed the pieces into two garbage bags. This might sound a little wasteful, but during our last night it became pretty evident there was hole as we woke up much closer the floor.  Our move out was scheduled for 9:30 a.m., so we had just enough time in the morning to make a trip to Melissa’s office where we dropped off the few pieces of luggage we were taking with us, and planned to live out of for the next two months.

During our walk through, the management company displayed some Swiss efficiency by scheduling the new tenants to do their move-in walk through concurrently with our move-out.  This made things a little awkward when the management representative, who only spoke French, complained about some holes in the wall, a few wear and tear issues, and the state of our cleaning.  I think we did a good job of diplomatically explaining how we told management about the problems, but nothing ever happened, without making the apartment seem like a bad place to live for the new tenants.  To completely satisfy the management representative on our cleaning I stayed until 12:30 p.m., going over already clean areas to make them spotless. I also had to run to a home improvement store to buy a toothbrush holder, and soap dish as replacements for ones we had broken sometime during our two year lease.

Whew! We were finally through the tough parts of moving!  That night, we lugged our luggage through the rain to a small hotel where we toasted our last night in Switzerland with plastic cups, a bag of peanuts, and a bottle of Greek wine. Before we boarded our plane on July 4th, we had just enough time for one last European tour.  To read about our final trip to Germany, you’ll have to check out my next post…

One thought on “Moving Away…”