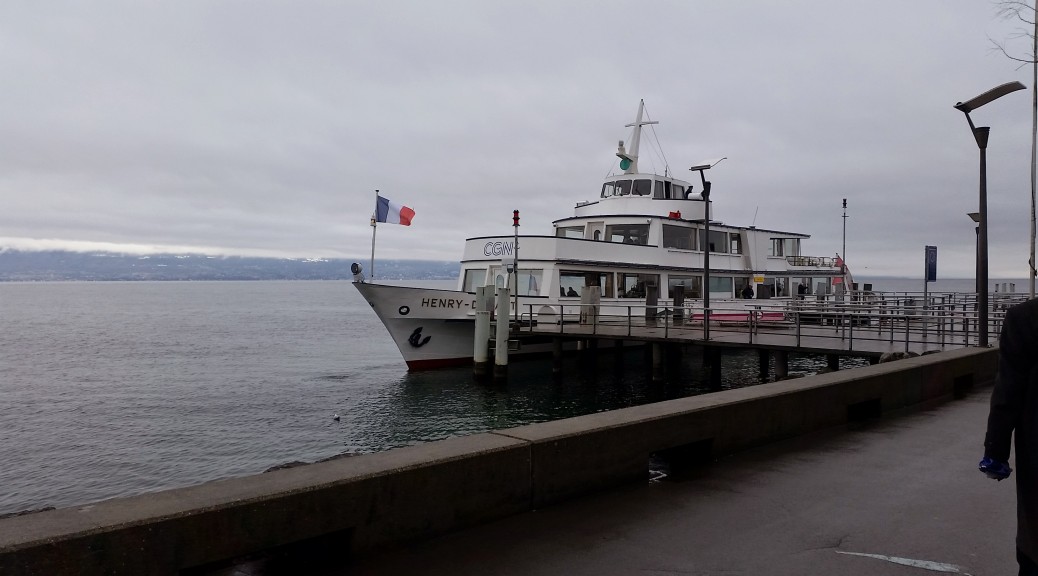 On Sunday March 1st, we were between apartments, living in a hotel, and bored.  To kill some time, we decided to spend four hours on a boat cruise around Lake Geneva.  At 12:30 our ship cast off from Lausanne and headed east.  We stopped at a little towns every 10 or 20 minutes all the way until we reached Chateau de Chillon, on the eastern edge of the lake.  Then the ship turned around, stopped at the same little towns, and reached Lausanne at 4:30, where we disembarked.

Along the Swiss side of the lake the scenery begins with the city and suburbs of Lausanne, then gives way to a rural wine region called Lavaux.  The terraced vineyards on the steep hills are a world heritage site originally built by the Romans. Along the way we stopped at the little Swiss towns, they were never large enough to make it loose it’s rural vibe.  The wine hills get steeper and taller as you travel east, until eventually they are too steep to have vineyards and turn into the foothills of mountains.

On the French side of the lake are the Alps. It is surreal how steep and tall they jut up from the lake.  I had to remind myself looking out the boat window that what I saw was the real world and not just a landscape painting.

The ship was big enough to have a restaurant, and since we were traveling around lunch time we decided to reserve a table.  There were only two meals on the menu, fish or beef, and both came with preselected appetizers and desserts.  We both had the beef and weren’t disappointed.

The day was gray and rainy but we still had a good time, and took some cool pictures I think.  Check out the album below.

One thought on “Lake Geneva Cruise”