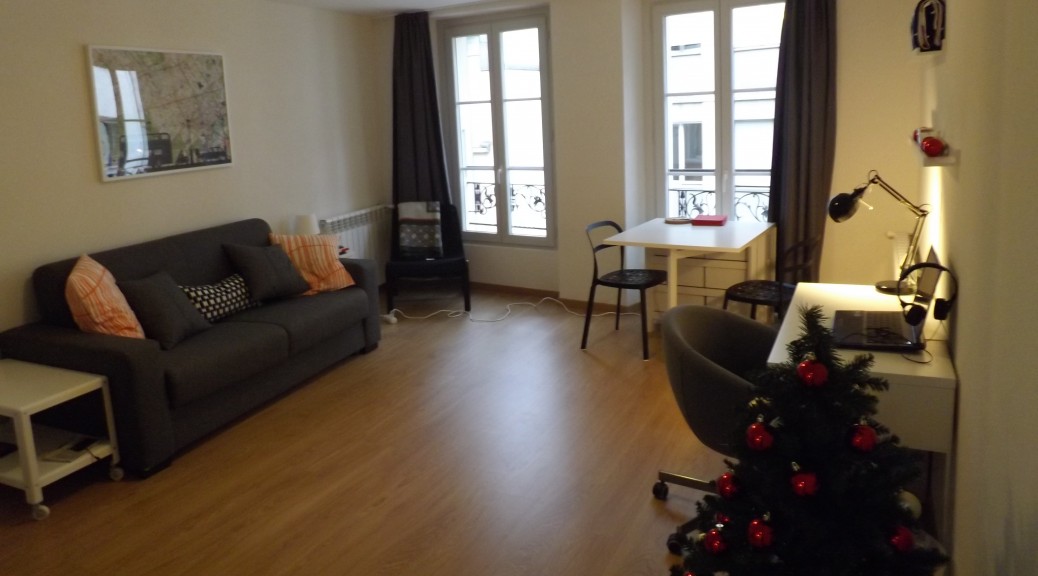 This week was our last living in the center of Lausanne.  On Friday we said goodbye to our studio and are currently in a hotel.  We’re only temporarily homeless though, on Monday we are travelling to the suburbs and our new apartment!  Packing, cleaning, and preparing for the move were the main orders of business this week.

When we moved from America in December we were able to pack everything into two big suitcases, two backpacks, two carry-ons and two laptop bags.  This time, even though we only added a few more things, we also had to pack a big tote,  two big bags full of stuff (paper towels, toilet paper, clothes hangers, etc.), and one Christmas tree.  A huge reason for the extra volume is also not having a vacuum cleaner to shrink our space bags this time.

Even though we have more bags this time, moving is easier because we can make multiple trips.  Starting on Wednesday we brought packed bags to Melissa’s office one at a time.  We ended up storing the two big suitcases and tote under her desk, and the two bags and Christmas tree in a storage room.  On Friday we were able to check in to the hotel early and I ended up making three trips to bring the rest of the stuff to our room.  We briefly looked at renting a car to help us move, but decided against it because of the cost, and my having the time to walk and ride the trains.  We also thought that there would be added stress figuring out how to navigate the narrow one way roads with limited parking.

Cleaning the apartment for move out was extra work because it’s a furnished apartment.  Fresh on my mind was our stupid rental company in Minneapolis that wanted to find anything and everything to charge us for at move out.  So I spent a lot of time checking for any stains on the furniture, re-washing the dishes and dusting every nook and cranny.  On Friday when the rental company man came for the check out he literally only looked around for 5 minutes.  He ran his hand across the table to check for dust, counted the dishes and poked his head in the bathroom and said everything looked good, and we would have no charges.  It’s good we don’t have charges, but I had that place looking so spotless I kind of wish he would have spent more time inspecting.

In addition to the packing and cleaning, there are little details to take care of with the move.  These little details are made harder in a foreign country with a foreign language.  We had to set up a change of address and mail forwarding, which we are supposed to be able to do over the internet, but for some reason it wouldn’t accept our credit cards.  So I had to do that in person at the post office.  Internet and electricity are not included in the rent.  For internet I found the cheapest service, but to sign up they require you to show up in person at their office.  So I still have to do that sometime next week.  For electricity, everything I found on the internet says the rental company will switch it into our names, but just to be sure I’ll still have to ask at move in.  We also had to spent some time figuring out where we’d be this weekend since we’re in between leases.  It’s stupid over here that no one wants to work on the weekends, our old lease is up on a Saturday, but we had to leave on a Friday, and our new lease starts on a Sunday but we can’t move in until Monday.  The last annoying thing, since we’re foreigners changing addresses, we have to go to a government office in person (of course you can’t do this online) and tell them our new address.

A  piece of good news this week, we finally got a Swiss bank account!  The secretary at Melissa’s work was able to set us up with someone at UBS who works with foreigners without residence permits. It was quite a different experience than opening an account in the U.S.  When you first enter the UBS building you walk into a large lobby that only has one desk with a concierge – no tellers or counters. Melissa had made an appointment, and when she arrived the concierge escorted her to a conference room with a door and lock not too unlike a safe. A banker met with her there, and she quickly found out that to add me onto the account I would have to be present. So she called me up and I quickly ran over. When I arrived the banker had left the conference room to enter the account information somewhere private, but I found Melissa enjoying a spread of espresso and swiss chocolate. Everything went smoothly, it’s nice to not worry about cashing checks, or carrying around large amounts of cash anymore.