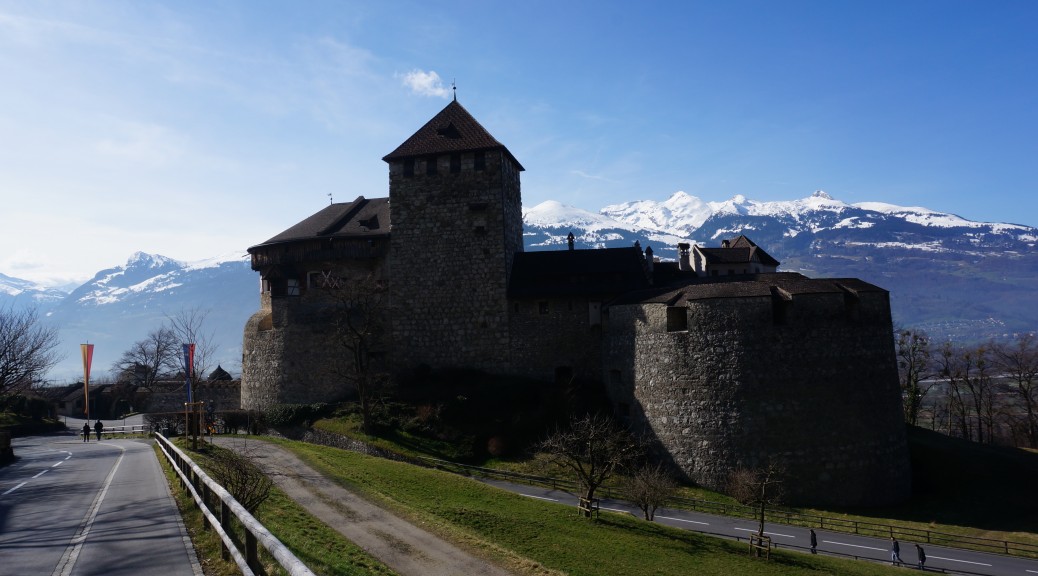 Last weekend Melissa and I went on a grand-loop tour of Switzerland by train.  We left early Saturday morning from our home in western Switzerland, and rode through the north of the country all the way to the eastern border.  In the east we made a detour across the border to visit the country of Liechtenstein, then continued our loop, riding south into the mountains until the resort town of Davos, where we spent the night.  On Sunday we slowly made our way back home in first class on the world famous sight-seeing train, the Glacier Express, through the mountains near the southern Italian border. 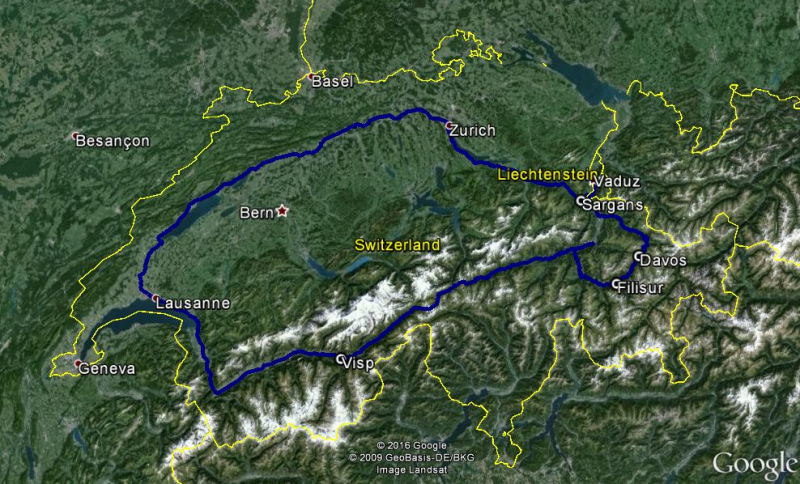 This trip was much more about the journey, riding the Glacier Express, “The slowest express train in the world,” than the destination.  In a country where nearly every train ride has incredibly gorgeous views, this train is touted as having the most incredible gorgeous views.  It winds back and forth, and up and down through 180 miles of picturesque Alpine scenery from the resort towns of St. Moritz to Zermatt, over a total of 8 hours.  When researching things to do in Switzerland, it would be impossible not to hear about it, and it even comes highly recommended by Rick Steves!

Last year for Melissa’s 28th birthday I was a cheap husband and gave her a hand written coupon saying I would book us a trip.  She didn’t forget about it, but never cashed it because she thought maybe we could do it with some of our visitors.  The big time commitment to ride it deterred our short staying guests, so a few weeks ago, with her 29th birthday fast approaching, Melissa finally decided to cash in the coupon.

We decided that making the entire journey in one day, which would require over 13 hours in the train, would be too exhausting.  After searching for hotels in South Eastern Switzerland, we  found a good deal (i.e. free) at the four star Intercontinental in Davos, that Melissa could book with credit card points.  As for the train tickets, being savvy Swiss residents we were able to take advantage of a perk offered only to residents: discount Swiss passes.  Each resident of Switzerland is allowed to buy four 1-day Swiss passes (good for unlimited travel anywhere in Switzerland) from their commune (city of residence) each year.  We each bought two passes, one for the ride to Davos, and one for the ride back, which saved us considerably.  With all the savings we were even able to splurge on a first class upgrade for the Glacier Express leg of our tour.

When Saturday February 27th came around, we boarded our first train at 7 a.m. with a final destination of Davos.  Being that we didn’t know when we’d ever be in that corner of Switzerland again, we also decided to visit the country of Liechtenstein which was right along the way.  The morning was a little cloudy, but by the time we reached Zurich the sun was out and the views were far off into the mountains. 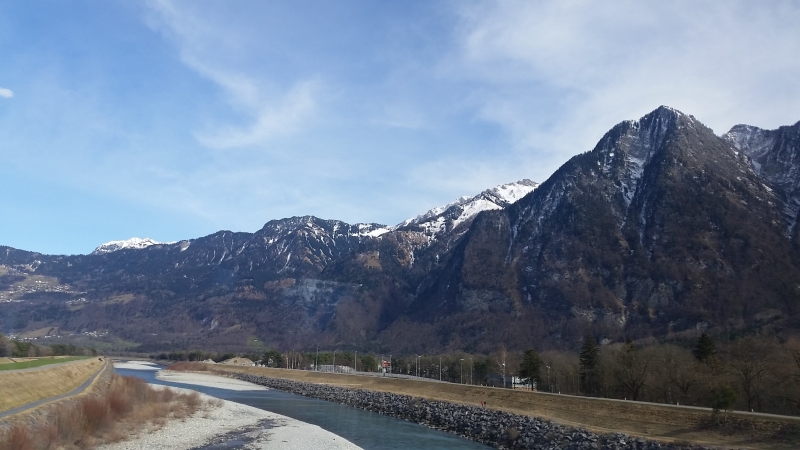 Our detour into Liechtenstein started from the Swiss town of Sargans, situated just across the Rhine river from Liechtenstein.  We boarded a bus headed to the capital of the country, Vaduz, then anti-climatically crossed the river and drove along the one main road of Liechtenstein.  After about a half hour, we had traveled about halfway through the entire country to arrive in Vaduz.

Liechtenstein is one of the smallest countries in the world having an area of just 61 square miles, which is comparable to the size of the city of Minneapolis (58.4 sq. mi.), and a population of just 37,340.  It’s constitutional monarchy government is uniquely undemocratic for Europe, giving the Prince of Liechtenstein the ability to veto any law and dissolve parliament.  It has existed as a country ever since 1806 when a treaty imposed by Napoleon dissolved the Holy Roman Empire.  Why it still exists… I can only guess that no one thought to conquer it, and that the citizens haven’t thought to join a different country yet. 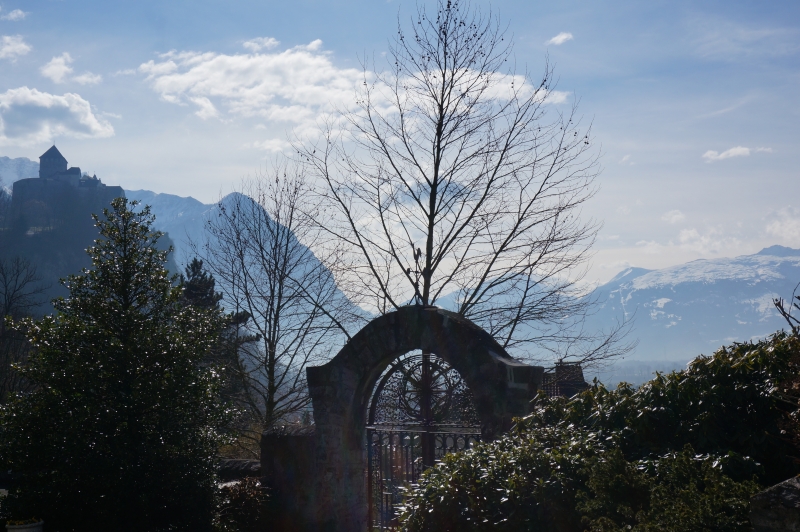 The main sight in Vaduz is the Prince’s castle which overlooks the rest of the town from a  high hill.  After a picnic lunch, we found a long walking trail that zigged and zagged up the hill.  Along the way were lots of informational signs written in German, French, and English explaining the history of Liechtenstein.  The weather was perfect, giving us amazing views of the mountains across the border in Switzerland.  I’m glad we took some great pictures, because it’s hard to believe the views without seeing them.  It felt like a little kids idea of a fairy tale kingdom with the giant castle and almost impossibly perfect mountains surrounding us in a clear blue sky.

Happy to be able to check off another country from our been there done that list, we left the way we came.  In Sargens we boarded a train for Davos that took us higher and higher into the mountains, up past the snowline.  In Davos it was cold with a foot of snow on the ground. Much different than our walk in Vaduz on a path littered with budding spring wildflowers, and a temperature that was too warm for coats. 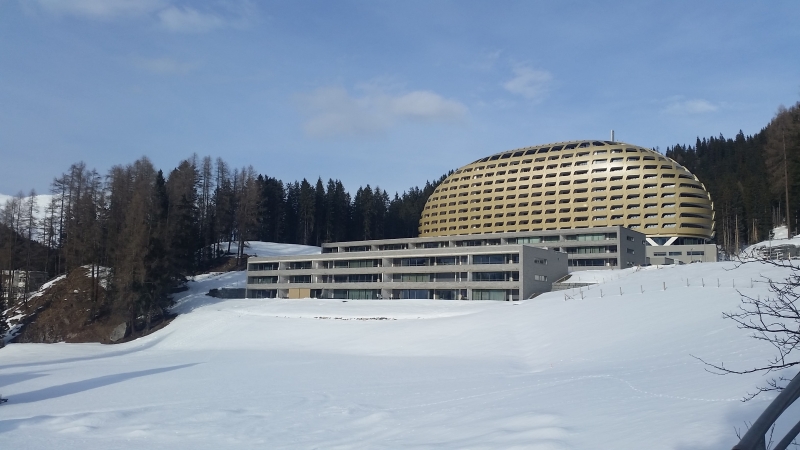 Our hotel, with a unique egg shaped architecture, was just a short bus ride away from the train station, on the outskirts of Davos.  We were thrilled when we checked in to discover that our room would be on the 8th floor, with a commanding view of the valley and the whole town of Davos.  The room came with a complimentary mini-bar, and notable (to me) a phone set up by the toilet.

After settling into our room, and enjoying the view, we visited the hotel’s pools on the main floor.  There were two, one completely normal and indoor, and the other, interestingly, partially indoor, and partially outdoor.  An automatic door would slide open to let you in or out, and it was heated, so swimming outside in the freezing weather didn’t cause hypothermia.  There were also saunas near the pools, but we were both too scared to try them out  because the one we looked inside had a naked guy spread out laying on the whole bench.

For dinner we ate at the hotel restaurant and tried a traditional plate of the region called Capuns.  It’s small pieces of chopped meat mixed with dough and sauerkraut then wrapped with a chard leaf.  Over this is poured a liquid cheesy sauce. 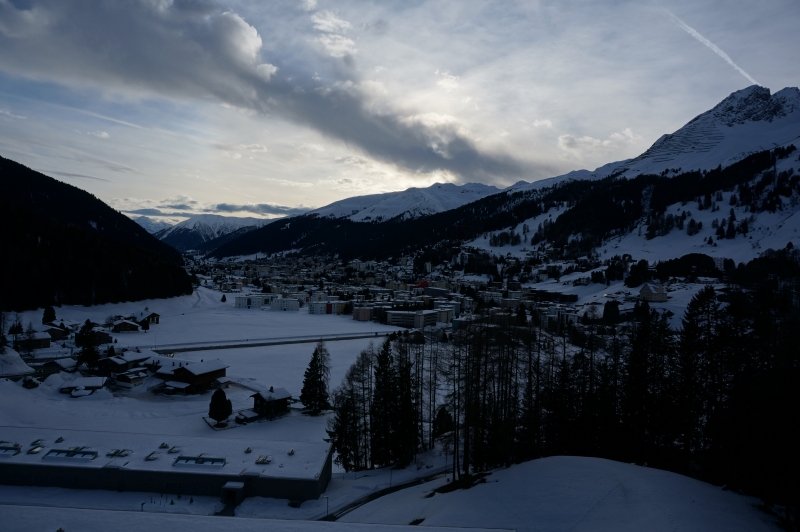 The next morning we woke up to clouds, but the views were still far and wide.  We left the hotel around 9 a.m. and caught a train for the town of Filisur, where we would catch up with the Glacier Express.  We were able to ride all transit, even the regional trains, in first class, so we took advantage of it.  We sat in the engine car on our first train, which was fun because looking forward was a clear view to see the same view the conductor sees.

In Filisur we transferred to the Glacier Express.  Our car was at the very end of the train, and we both had window seats.  It was immediately apparent that this train is for sight-seeing with its big comfortable chairs, and big giant windows.  The windows weren’t just on the sides, but also on the tops of the cars.  There was a server that kept walking through the car asking if we wanted drinks or a meal, but we were cheap and brought our own snacks. 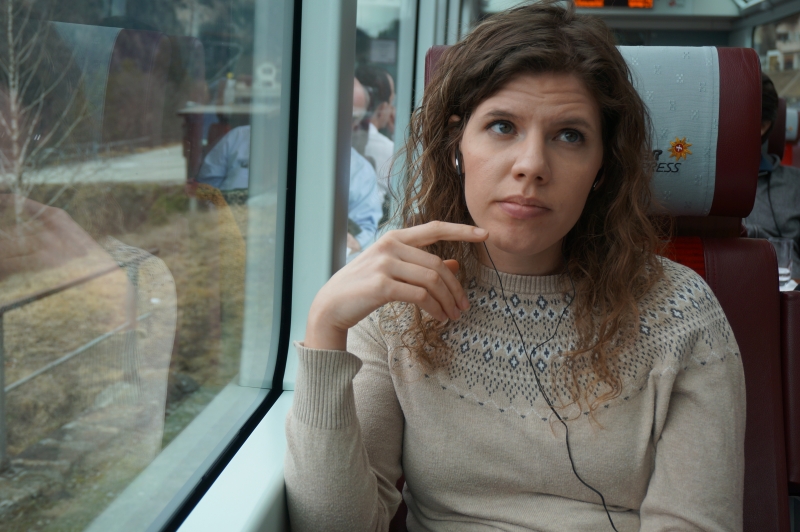 Also of note were the head phones at our seats that would rattle off facts at certain times about the areas we were going through.  The most memorable fact from the headphones came near the town of Fiesch where they stated that the residents had been praying for the glacier above the town to shrink in size for 400 years.  This was because it used to often cause devastating floods.  Now, however, the residents changed their prayers seeking the glacier to grow in size because they feel bad about global warming. 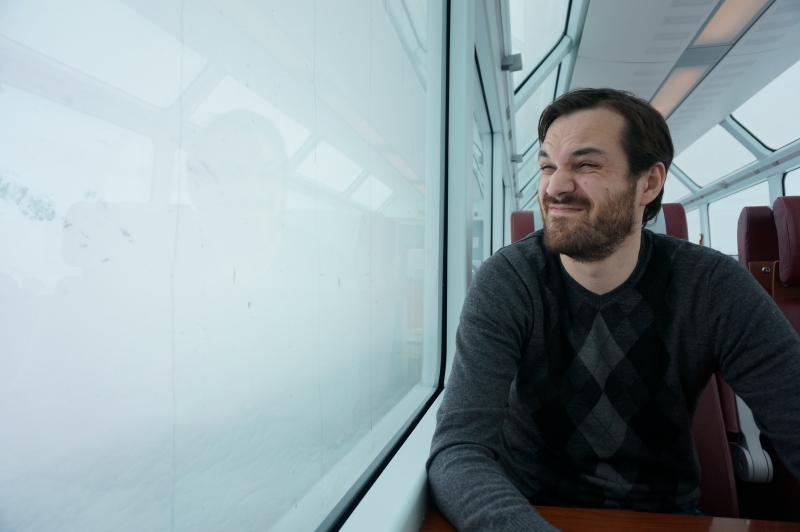 Our journey was wonderful and scenic for the first half as we rode along the gorge of the Rhine river.  Unfortunately our pictures don’t do it justice because the double paned windows ruined most of them with glare.  About halfway through our trip we started climbing into the mountains and it started snowing.  Most of the time we had decent visibility, but the tops of the mountains were shrouded by clouds.  A few times it was near white out conditions that hurt my eyes even to look out the window.  The weather improved again as we descended in altitude, and eventually the snow turned into rain.

One other cool and interesting thing from the trip was seeing cars loading onto a train to be ferried through a tunnel to the other side of the mountain.  Instead of building a new tunnel for the cars to drive under the mountain, the Swiss just make them use the existing train tunnel.

In the town of Visp we left the glacier express, and caught a boring old regional train home.  We rode home in the quiet and un-crowdedness of first class, thinking of the great trip we had!

4 thoughts on “Liechtenstein and The Glacier Express”