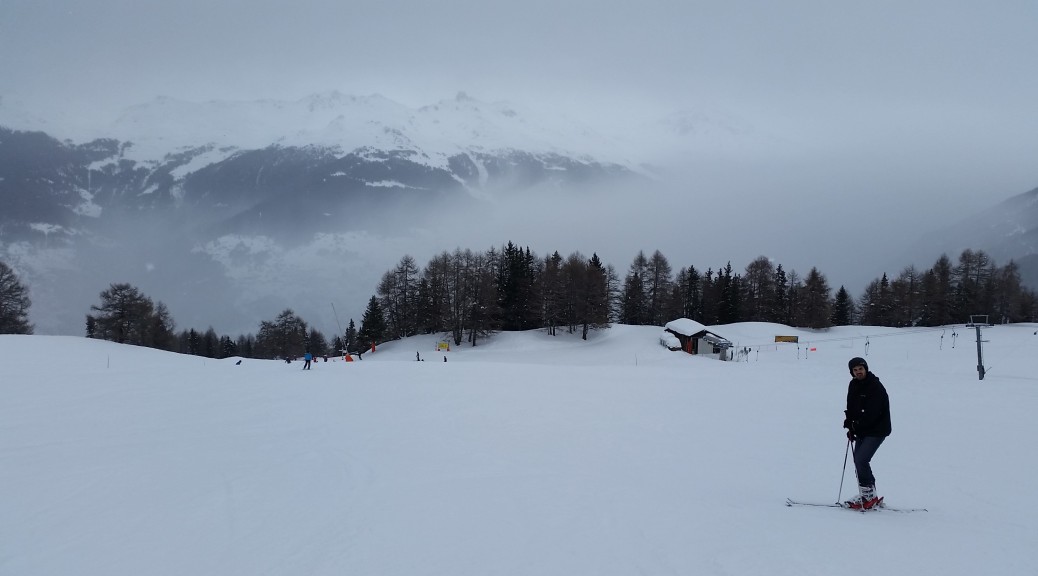 For my 30th birthday my wonderful wife sprang to take me alpine skiing.  I had been bugging her to go for a while, but I was happily surprised when she actually agreed.  Our trip was her first time downhill skiing in five years and only the fourth time in her life. She was swayed to try just so she wouldn’t have to live with the regret of never going when she lived so close.  For me the trip was my second in Switzerland, and I used to ski enough to think I’m OK at it (however since I’ve reached 30 some of my abilities have started to fade).  Neither of us broke any bones, and we both had a great time!

At 6 a.m. on Saturday we woke up to begin the two and a half hour trip to the mountain, riding all the way on Switzerland’s well connected public transport network.  Our train left Lausanne and rolled into the canton of Valais where the snow capped mountains were just visible on either side of us through wispy  clouds.  In the town of Sion, at 500m (1640ft) we transferred to a bus that took us high up into the mountains along narrow switch back roads, that at points were so narrow that the bus would have to stop and back up to let oncoming cars through.

We pulled into the mountain village of Les Collons at 1800m (5900ft) and checked our map for the ski rental shop.  It was just one street over, but required a difficult walk up a steep and slippery walking path, that had us crawling on hands and knees at one point. After making it up, and walking toward the shop, we saw a much easier, and shoveled path that we should have taken.

Ski rental and buying a lift ticket were a breeze, (even though they were done in two different buildings).  Then we walked directly across the street from the rental shop to where the skiing started with a t-bar lift up to a blue rated hill.  This is the lowest level in Switzerland, with the ratings going from blue, to red, to yellow, and then black as hardest.   Despite what I thought after skiing with my family, the slopes are actually labeled on the mountain.  The markers are easy to miss narrow sticks on the edge of the slopes that are colored and look like border markers.  Also helping us figure out the difficulty level this time was looking at a map beforehand.

A Switzerland blue is much harder than a U.S. green, consequently, our first time down was slow.  It took Melissa a while to remember how to turn without falling down, and I wasn’t being the best teacher.  She stuck with it though, and after going down the same hill four or five times we felt confident enough to ride a different, longer, t-bar to higher up the mountain.  The higher runs actually seemed a little easier, and we stuck with long runs, that took about 20 minutes from top to bottom, for the rest of the day.

The weather was cloudy and snowy all day, which was a little disappointing for the views, but gave us some nice fresh snow for skiing.  Between the clouds we could sometimes make out the wall of mountains that surrounded us, and look down into the valley we came in on by train (but we couldn’t quite see to the bottom of the valley because of how high we were).  There were also strong winds occasionally, that made life difficult because we seemed to be the only two people without ski goggles.  Thinking about apparel, I also failed to notice any other skiers, besides myself, wearing blue jeans.

We skied for about two hours in the morning, had a lunch break, then skied another two hours in the afternoon.  Before leaving we found a bar to wait at until our bus returned, and Melissa was happy to find a stout beer.  At 30 my life isn’t where I thought it would be even just a few years ago, it’s better than I could have imagined!