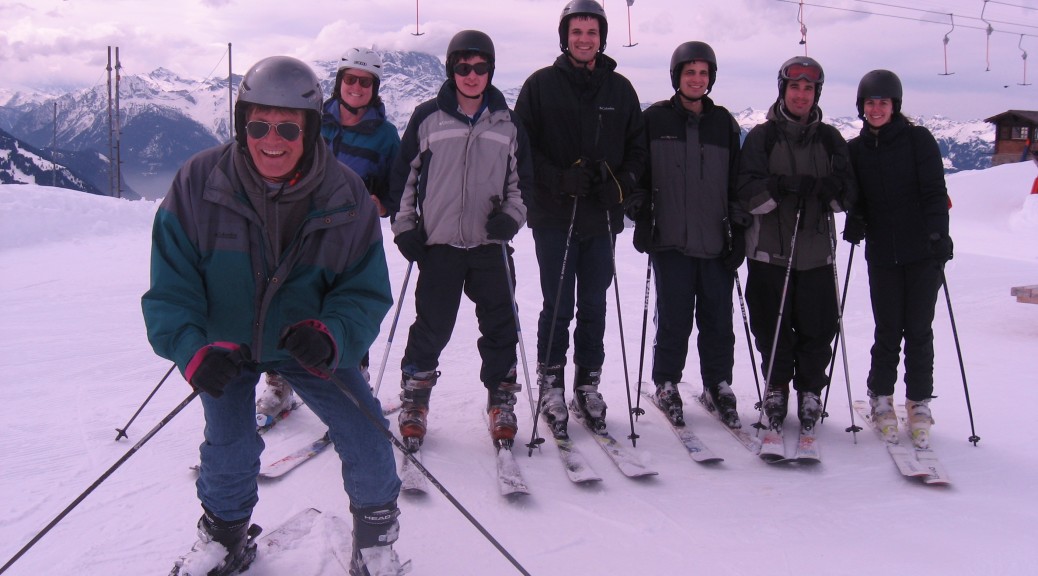 On Sunday March 14th the good Catholics in the family woke up early, took a 15 minute walk to the city of Renens, and attended 8AM Mass.  The church architecture is a modern circular cement building; much different than the old ornate cathedrals we sight-see. The language is French, of course, but it doesn’t feel so foreign because you know exactly what everyone is doing since the mass order is the same as the U.S.

The good Lutherans slept in, but made up for it by cooking a brunch of bacon, eggs, toast, and pancakes.  After brunch we all caught a train to Geneva.  It was a gray and hazy day, just like the first time Melissa and I visited.  So again we didn’t get the incredible mountain views which Geneva is known for, maybe next time… Besides the gray skies it was also disappointing that for some reason the Jet d’Eau, one of the cities most famous landmarks, wasn’t running.

We walked pretty much the same path Melissa and I took on our first visit.  We saw the Brunswick Monument, walked through the English Garden, stopped at the Museum of Art and History, walked through the old town and cathedral, and made it to the Parc des Bastions with the Monument to the Reformation as our farthest stop.  We then slowly walked back to the train station stopping for kebobs along the way as a lunch/supper.

The Museum of Art and History was my favorite part of this visit. It’s my favorite museum in Europe so far.  It’s free, it has just the right amount of stuff so that you don’t feel overwhelmed, it’s never been too crowded, and it has a nice variety of art and history.  We also got a nice treat on our visit with a free string concert as we looked at the fine arts.

The next day everyone, except Melissa, got ready and out the door early for skiing in the Alps.  Melissa felt a little unsure about her ability, and someone has to support my lifestyle, so she decided to go to work.  Our journey to the mountain began with a forty minute train ride to the town of Aigle, east of Lausanne and at an elevation of 415 m.  We then rode a bus for half an hour to the base of the mountain in the ski town of Villars-sur-Ollon at an elevation of 1258 m.  It was a cool bus ride with awesome views of the mountains and valley along 10 km of a twisting and turning narrow mountain road.  The final leg of the journey was a long gondola ride to a place where we could either ski down or take more chairlifts up.  The highest point a chairlift would bring us was 1884 m.

The ski area was much larger and had much steeper hills than anything I’ve skied before.  There were no trail signs, or at least none that we could find, so it was hard for our big group to stay together, and not knowing the easy paths down we seemed to always find at least one section each time down that would be a black diamond in Minnesota.

Twice my parents and Mike decided to just walk/slide down when we reached a steep part.  The second time they were walking down Mike started to have pain in his leg, from the cold, and falling and twisting it.  Luckily at the bottom of this hill was a ski patrol.  My Dad was the first walker down, and even though he spoke no French and the ski patrol spoke very little English, he was able to get them to drive a snowmobile up to pick up Mike.  Mike said it was a pain he’d had before and felt well enough not to go to a doctor, but after this excitement he and my parents decided to find their way to the bottom of the mountain.

They didn’t have to ski down because right next to the ski patrol was a train to Villars.  But this train didn’t bring them back to the exact spot we came up.  They ended up getting lost for a while and even going to a different town.  It all worked out though because by just about the time they knew where they were and found a bar to wait at, the rest of us had decided to come down too.

The rest of us stuck together and made about 5 or 6 more trips up and down, until 4pm when we decided to leave. (The hills are very long!) One of the times down we tried to make it all the way to the original gondola we rode up.  As we dropped in altitude we saw less and less snow and more and more bare ground until Kevin unfortunately found some bare ground right in the middle of the ski hill.  He bit his lip pretty bad when he fell, but it stopped bleeding by the time we found a way back up, so he decided to keep skiing.

When we returned to the apartment sometime after 6 Melissa had appetizers and chicken dinner waiting for us.