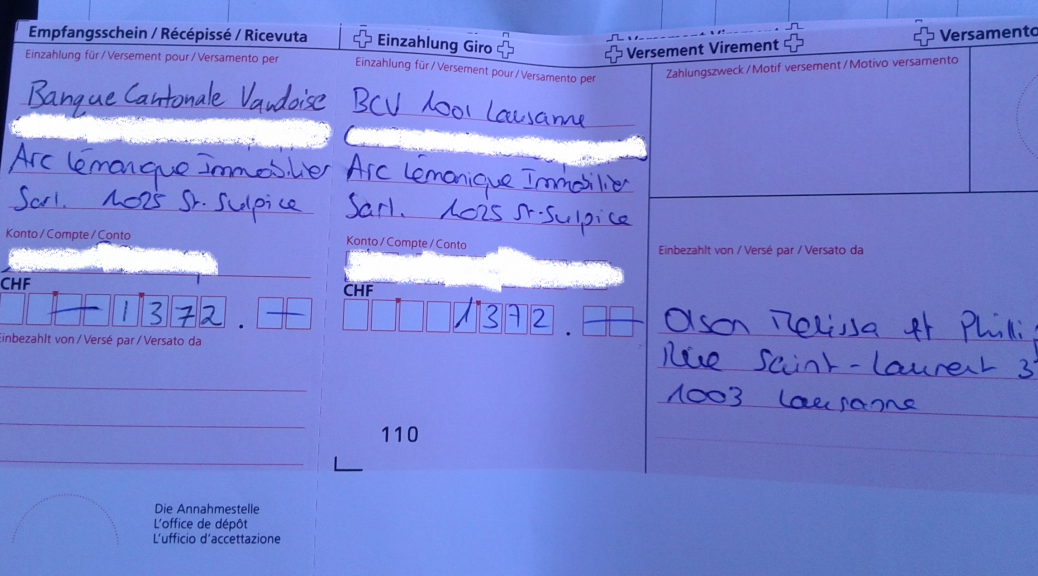 Yesterday I paid our rent bill for January. Back in the US paying rent was as simple as writing a check and dropping it in the mailbox. In Switzerland paying rent is quite the ordeal to figure out, especially if you (still!) don’t have a bank account and can’t quite speak fluent French.

We received our rent bill in the mail last Wednesday. When we were in the US we paid our Swiss rent by wire transfer, but this time we didn’t think that would be best. To wire money costs about $100 worth of fees on top of the bad exchange rate they give you. Furthermore, I think we would have had to set something special up in the US to be able to wire money without physically being in a US bank.

We searched the internet a bit to see how people pay bills in Switzerland, and the easiest method looked like sending an online transfer from our Swiss bank account to the rental company’s account. Unfortunately we still haven’t been approved for a bank account, and the day after we received the rent bill, a letter from the bank we applied to arrived. It said the bank need copies of our Swiss resident permits before they could open an account for us, which we don’t have yet and don’t expect to receive until sometime after the holidays (which, coincidently, is after the rent is due). So that ruled out the easy option.

The other common way to pay bills in Switzerland is through the post office. I already had experience with this from paying a bill for some Nespresso capsules we bought on a promotion. The bill paying process started with Nespresso sending us an orange slip with the amount owed and their banking information in the mail. I walked into the post office with cash and the slip, I handed them both to a clerk, and the clerk gave me a receipt saying that the bill was paid. That was that. However, the rental bill didn’t come with an orange slip. Searching the internet I found I could still pay at the post office, but I would have to manually fill out all the details on a red slip.

So this Monday morning, promptly at 9AM, I headed to the post office two blocks away, with all the rental company’s banking information written down and a copy of the orange bill I paid to Nespresso. I figured I’d find the red slips, look at my filled out orange slip and know where to write all the information. After a minute at the post office I found a red slip. It had different words and spaces than the orange slip… I was completely lost as to where to write anything, so I figured I would just grab a number, get in line, and talk to a clerk about filling it out.

I knew enough French to say, “I need help, I am lost, I would like to pay a bill,” then push the slip and bill toward her. However, my French failed me when she started pointing to a blank space on the bill and asking questions. I thought maybe they needed some kind of tracking number, or this kind of bill wouldn’t work at the post office, so I was stumbling trying to say I would call the company and ask for the number. Finally, she asked if I spoke English. “Oui!”

She grabbed a different clerk who told me I needed the account number and BIC/Swift number to pay the bill. I don’t know why I didn’t realize that’s what the first clerk was saying in French. I flipped over the bill and showed her where I had written down all the bank information of the company, to which she replied “Oh good, I can fill out the slip for you.”

Then we came to the part where I needed to actually pay the bill… I was a little scared that the post office might not accept my credit or debit card, so Sunday I spent some time looking on the internet to see if they say anything about it. I feel like if I had a similar question in America and did a few Google searches I would find thousands of answers. But here, I could find nothing on the post office website, English forums, or even by searching in French. In the end, I figured that since my cards work at all the stores, restaurants, and ATMs, why not at the post office? Well not everything can be that easy, and of course the clerk told me I can only pay with cash or a Swiss post office cash-card then pointed me to an ATM. I was 99% sure they wouldn’t let me take out 1400 francs at the ATM but why not try? Unfortunately, as I expected, my daily withdrawal limit was too low to pay for the full rental amount. I apologized to the clerk and went home, but at least I had my slip filled out.

I came up with a new plan. I would just have my bank quickly increase my daily cash withdrawal and stop at an ATM again. I called customer service, finally got through to a person, and told her I wanted to increase my daily withdrawal amount. “No problem, it just takes a couple days for the paperwork for that to go through.” That wouldn’t work: I only had two days to pay this before Christmas after which we were planning on going on a trip outside the country.

Once again I had to put on my thinking cap. We brought over $1100 American just in case we needed it in an emergency. If I took out 400 francs from the ATM and exchanged our American money, I would have enough cash for rent. We made it exactly 3 weeks before we needed our emergency cash, so that’s good right?

Getting 400 francs from the ATM was no problem, then I walked into the Credit Suisse bank branch looking to exchange my money. The Swiss banks are a little different than US banks. The building is multiple stories so there’s obviously a lot of people that work there, but when I walked in all I saw was just a small room with two clerks standing at what looked like information kiosks. This was nothing at all like a bank in the US with a counter and tellers. It took a long time to get to the front of the line, and only a few seconds to ask if they exchange money. The clerk said no, and that I could get francs from the ATM, and some other incomprensible (to me) stuff about a bridge and the city center, which were supposed to be directions to somewhere that did exchange money. However, I remembered there being a Western Union at the main train station, so I didn’t try very hard to figure out what she was saying.

Onward to the Western Union! The main train station is one metro ride away, almost straight down the hill towards the lake. I figured that since I was already going to lose money on the exchange, I might as well walk and save myself the metro fare. I got to the main station and it took me about 5 minutes of looking around and wondering if I only imagined the Western Union, until I finally found it. The exchange rate wasn’t terrible, just 6% over what the internet said, so I exchanged the $1100 USD and got back 1021.70 francs.

I made the long, steep walk back up the hill to the post office, waited in line for another 16 minutes, handed the clerk the cash and already filled out red slip, and got home just before noon with my bill paid. Only 30 more days until I need to pay the rent again….

6 thoughts on “Paying For Rent”