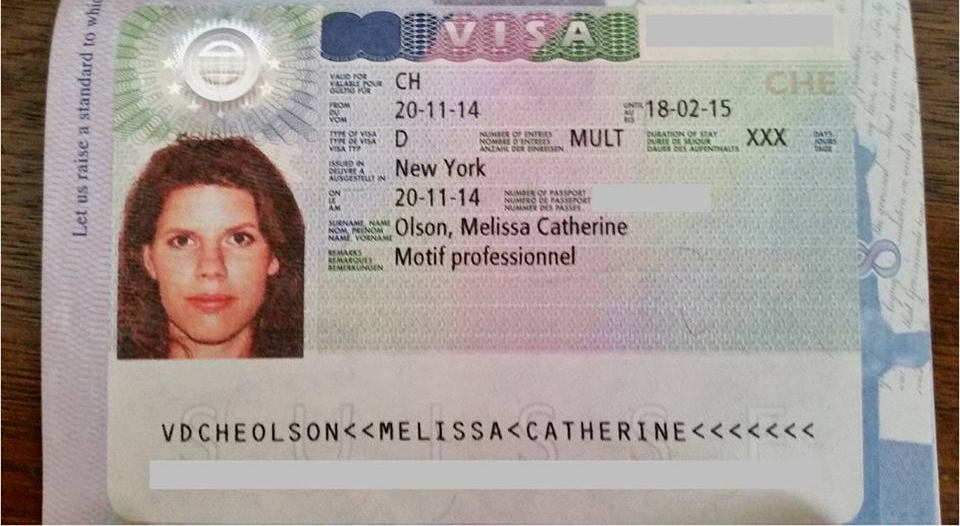 Melissa got back to her new boss right away and let him know she wanted the job.  Unfortunately it was the start of August, when almost everyone in Switzerland is on vacation.  So it took until September for an official offer letter to arrive and our ability to apply for a visa.

The visa application was a bit complicated.  Melissa had to fill out one form for a residence permit, and I had to fill out a different form for a family reunification.  We had to send a notarized marriage certificate, pre-paid postage, copies of our passports, and copies of the work contract.  They also required a visa photo with a two page instruction sheet with requirements such as, size 35mm by 45mm, the face needs to take up 70-80% of photo, no smiling, plain background, etc.

The Swiss visa photo size is not the same as a US passport photo size, so we couldn’t find a place to have them taken, and ended up taking the pictures ourselves. We found a website that helped a lot with the sizing called http://www.123passportphoto.com/.  We then printed off the photos and sent everything in.

The consulate says the visa application generally takes 2 to 3 months, so we had lots of time to worry over whether or not we filled out everything correctly.  While we were waiting we heard from the university that a university apartment opened up starting November 1st.  Melissa’s job wasn’t supposed to start until December 1st, but we decided to take it, and pay for the month we wouldn’t be there, as no one else in Switzerland seemed to want to rent to foreigners without visa’s or bank accounts.

December was fast approaching and we still had no word on the visas.  On November 17th we starting calling and emailing to see what to do in case the visas weren’t approved, or took exceptionally long to process.  Melissa’s boss let her know she could start work as a visiting researcher on December 1st if she wanted, then when the visas were approved, we would have to leave the country and come back.  We were starting to think we would have to go through all that, when on the 19th we received approval via email. We then air mailed our passports to the consulate in New York, and received them back on the 21st complete with visa stickers.

We had a going away party that weekend with my side of the family, spent a night doing some all-American bowling, and celebrated Thanksgiving with both our families.  Then on the 29th we boarded a plane for Switzerland.