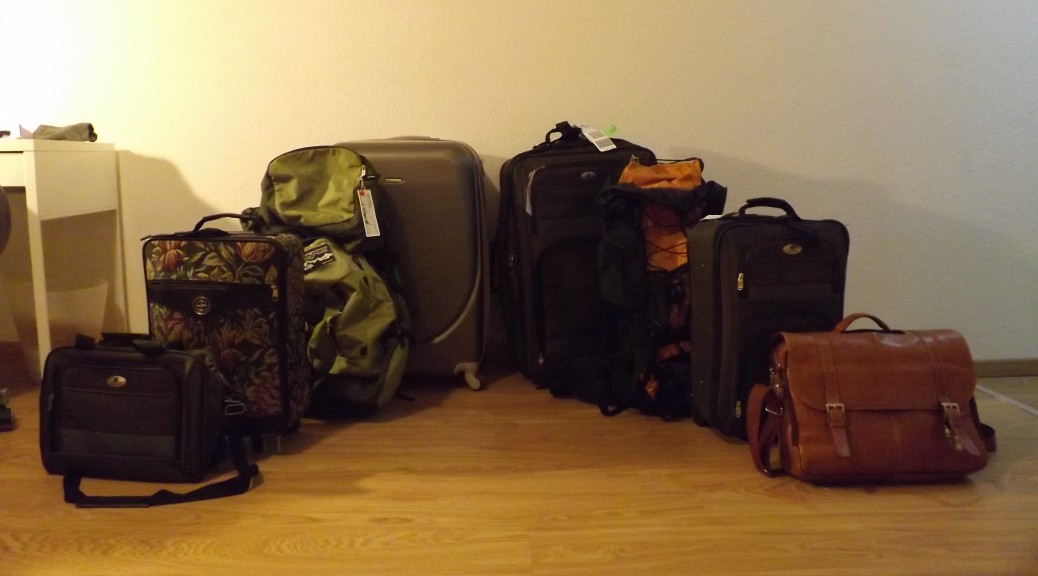 Before we could move we had to decide what to move.  The two biggest things that helped us cut down on what to bring were, moving into a furnished apartment, and knowing Switzerland runs on a different electrical system, so American appliances wouldn’t work well.  That left us with mostly just packing clothes.

We briefly considered shipping stuff over, but it looked a little too expensive considering we would have to ship everything back in a couple years anyway.  So we decided to see if we could fit everything into two checked bags, one carry-on, and one laptop bag per person.

It was tough.  It took a few iterations of going through clothes, sorting out ones to pack, ones to throw away, and ones to give to goodwill until we got it to a manageable size (and weight).  Even after all that, we still ended up storing a bunch of clothes at our parents’.

We used vacuumed “space bags”, and filled the two checked suitcases, along with the green backpack I would carry, until we almost hit the 50 pound limit.  Melissa packed her orange backpack at a wimpy 30lbs.  Both carry-on’s and laptop bags were also filled to near bursting.  We were satisfied we had everything we needed, the only thing we didn’t consider enough was how cumbersome it would be to carry this much luggage around a major city.

2 thoughts on “Packing for the Trip”