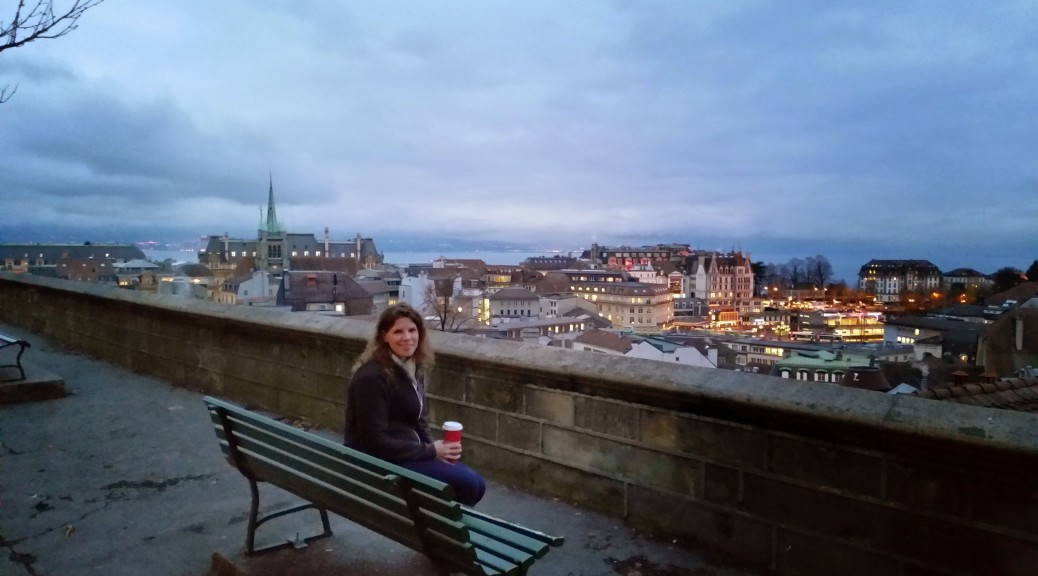 We both had trouble sleeping well our first night in Europe so when the clocked rolled around to 6AM on December 1st we both decided to get out of bed.  We were ready and at the train station at about 7AM, plenty early for our 8AM train to Lausanne.  We found a Starbucks purchased some coffee and muffins, and we realized we had forgotten to eat since breakfast on the plane the morning before.

Riding the train was easy.  We had assigned seats and there was a big area to store luggage between the cars.  The train takes three and a half hours to get to Lausanne, but time flew by while looking out the window at the French countryside.

The train stopped in Lausanne at 11:37AM and we had to be in a rush again.  We had set up a meeting with our new landlord at noon to walk through our new apartment.  Our route was to take a metro one stop and then walk two blocks to the apartment.  We got out of the train and started walking…the wrong direction.  I stopped a man and asked him in French if he knew where it was.  To which he replied “I speak English.  It’s right over there.”

We walked past a line of taxis which Melissa tried to convince me we should take, but we had already bought metro passes and we needed some exercise so we continued past them.  The metro was ridiculously crowded.  We split up and pushed our way into separate doors and luckily both got on.

Then it was just a two block walk (all up hill) to the apartment.  I had tried to fix the wheel on the green suitcase with a screw the night before.  At some point it jammed up again, but we were so close I just kept dragging it along the ground.  It was just as hard moving the luggage in Lausanne as Paris, plus Melissa wouldn’t let me take many breaks.

We arrived outside the apartment at 12:03 but no one else was there.  I was just getting ready to call when the landlord showed up and let us in.  Apparently the 200 lbs of luggage strapped to our backs and at our feet gave us away.  Once he opened the door, there were stairs, lots of stairs.  Our apartment is on the fourth floor, without an elevator, and it takes 67 stairs to get there.  We decided to take the luggage up one at a time, after the landlord left, but it didn’t get any easier.  The landlord showed us around for 10 minutes and gave us all the important information like how to do laundry, buy garbage bags, and turn on the fancy, child proof IKEA stove.

Our apartment is listed as 34.16m2(368ft2) but it seems big enough, and I don’t think they count the bathroom or kitchen in that number.  We are right in the center of the old town, and we have two charming french-style windows with green shutters that open up to a narrow pedestrian-only street.  We are finally home!

4 thoughts on “Paris to Lausanne”