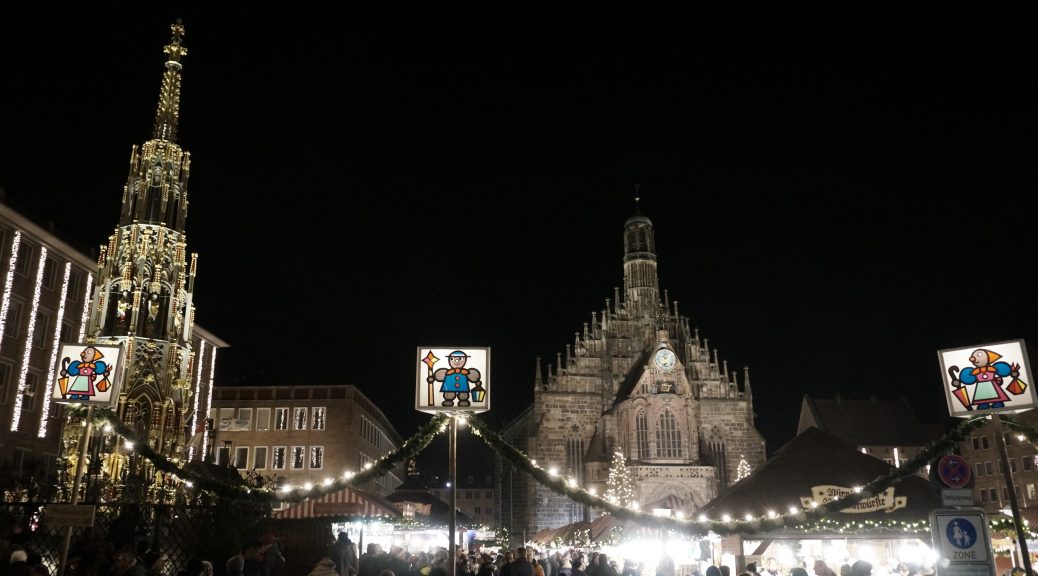 On Sunday December 4th our Christmas market tour took us to Nuremberg, Germany.  This walled city in northern Bavaria is home to one of the most visited and most famous Christmas market’s in the world.  It’s interesting to note that both Munich and Nuremberg call their Christmas markets “Christkindlesmarkt“, meaning “Christ child market”, instead of “Weihnachtsmarkt” meaning “Christmas market”.  In Bavaria, among other parts of the world, it’s traditional not to believe in Santa Claus.  Instead it’s the Christ child who takes center stage personifying the holiday, and bringing all the presents.

Our transport to Nuremberg was high speed train.  We left Munich at 10 a.m. and arrived in Nuremberg—over 100 miles away—at 11 a.m.  It was a crowded train, so even though we found a private six seat compartment, the two empty seats next to us were filled before we even had our lugged stowed.  It was a fun ride because the man and woman who sat beside us were very talkative.  We discussed life in Germany vs. life in the U.S.A.,  and also life in Russia because the woman was originally from there.  She told one interesting story that started by her describing how cold her northern Russian hometown was.  Then one day, in the heart of winter, it was warm, but the government told everyone to stay indoors with their windows closed.  Years later she said everyone realized the warm weather came from nearby nuclear tests.

Once in Nuremberg I thought we could take a bus to our hotel, but I had made a mistake of checking google maps the night before and having it direct me to a night bus.  Since it was only about a kilometer to the hotel we ended up just walking there.  After setting our luggage in our rooms we then went out to explore the old city. 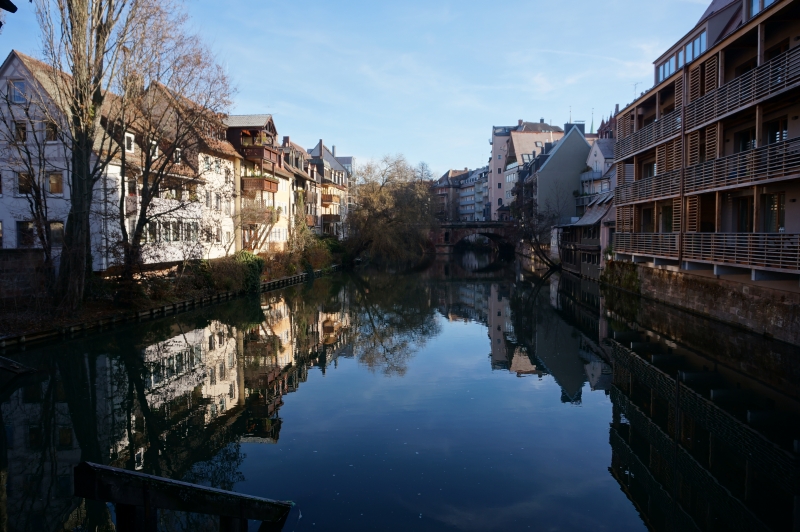 The old city walls approximately form a parallelogram.  Our hotel was just outside the walls at one corner, and the first sight we wanted to see, the city castle, was situated straight along the wall at another corner.  Since it was a bright sunny day we took our time meandering through the city toward our destination.  We stopped to admire the picturesque Pegnitz river that splits the old town in half, walked along the edge of the Christmas market, and then reserved at spot on a cellar tour before coming to the castle.

At the castle all the grounds are free to walk through, but touring the rooms costs money.  We ate a picnic lunch while enjoying the view down to the city from the high castle walls.  Then we walked through all the open courtyards we could find before heading to the gift shop.  At the gift shop we filled up on coffee then sat down to watch a nice video that gave the 1000 year history of the castle with English text.

We then had about an hour to kill before our cellar tour, so we took our time walking to the bar where the tour would start.  Since it was a bar we sat down for a drink, and happily realized we received a discount with our tour tickets.  Going on the cellar tour was about the same as I remember it from the last time, two years ago, when Melissa and I took it, but it was still worth it.  The cellars were built in the middle ages to brew and store beer.  They go up to four stories deep underground throughout the whole old city.  In World War II the cellars were used as fallout shelters, protecting many Germans, because the city was flattened by allied bombs. 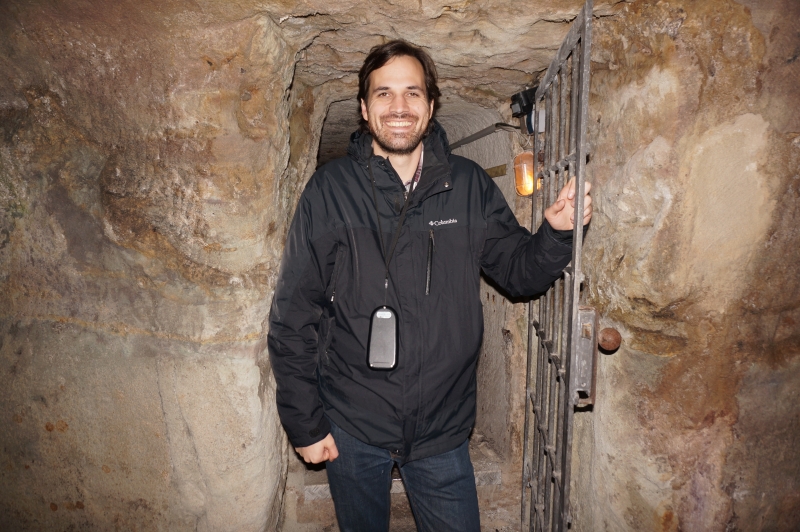 After about 80 minutes we came back to the surface to see evening setting in.  We took another slow meandering walk through the city, with a couple stops to checkout churches along our way back to the hotel.  We rested just a minute at the hotel then we were off to the Christmas market.  It was such a different experience walking through the city at night with all the lights and decorations strung out brightening the mood, as well as all the streets being filled with tourists, that it felt like a completely different city.

At the market we ate a lot of delicious foods, and drank a lot of delicious drinks.  Nuremberg is famous for a particular sausage about the size of breakfast sausages, that was sold at numerous stands three at a time stuffed in a hamburger bun.  In addition to trying this delicacy, we shared a pork hamburger, fruit cake, cookies, candied nuts, and a chocolate covered waffle.  For drinks we of course sampled the gluhwein, but also discovered the very sweet non-alcoholic kinder punch, and a kind of warm beer drink that only my mother liked.

When we finished perusing the goods on sale at all the stands in the tightly packed, crowded aisles, we made our way back to the hotel so that we could rest up for our next day traveling to Prague…