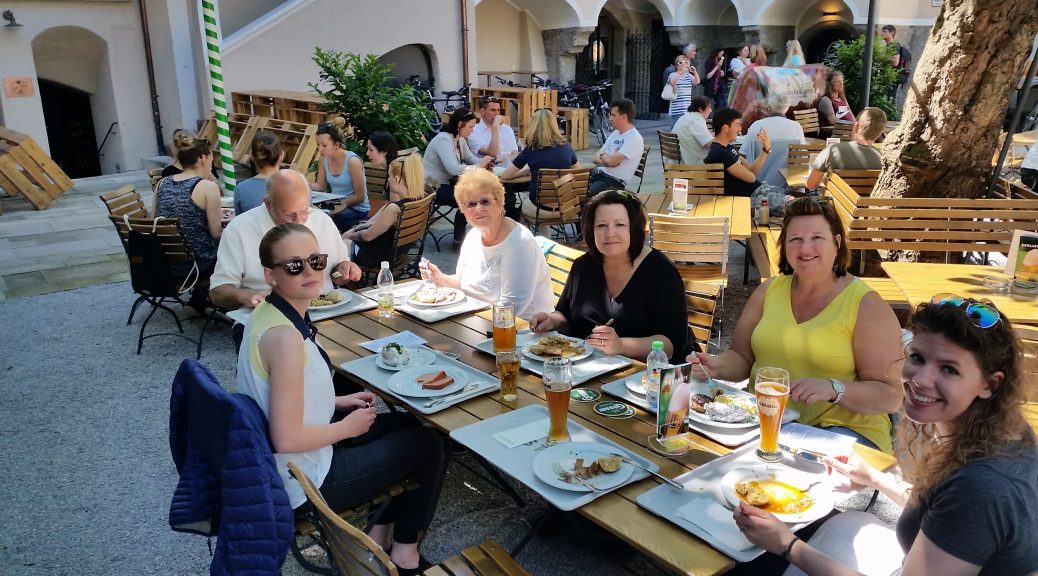 We had so much fun visiting with Melissa’s family in Switzerland that we decided to join them again for one more adventure – a weekend in Munich, Germany.  Their long European tour had already taken them through Switzerland and down to Italy, then, on Saturday May 21st, they arrived early in the morning to the last stop of their trip, Munich, via an overnight train.  Melissa and I, as well as Britt Sieber (a foreign exchange student from Germany who had stayed with Jeanie), also arrived in Munich on Saturday to see the sights, taste the beers, and to squeeze in more family time.  On Sunday we all traveled together to Salzburg, Austria where we saw its impressive old town, complete with a castle, and some awe inspiring views of the Alps.  Our adventure ended early Monday morning when Melissa and I headed back to Switzerland so that Melissa could be a good American and get in a half day of work.

The journey from our apartment to Munich is at such a distance where it’s hard to decide if taking a plane or train makes more sense.  When you add up the time it takes to go from apartment door to apartment door, flying takes a total of four hours.  The train/bus option, which had us take a train to Zurich, then a bus from Zurich to Munich, would take about six and a half hours, and drop us off right in the center of the city.  After some debating we settled on the public transit option because it was slightly cheaper and could get us in and out of Munich at more reasonable (earlier) times. 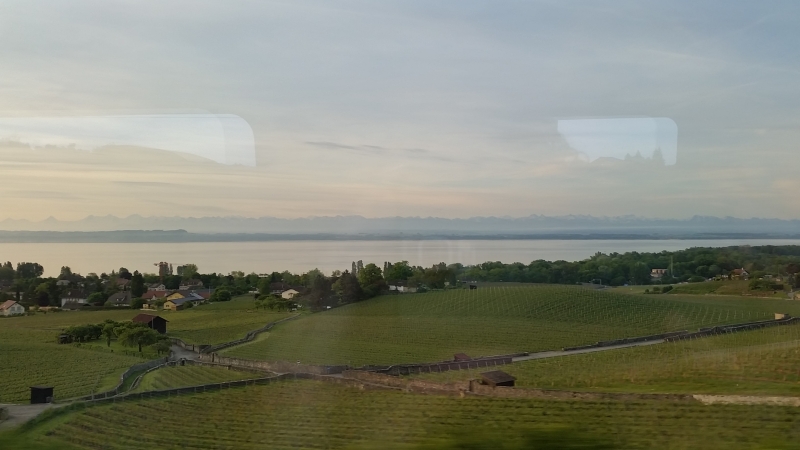 Our Saturday morning started before the sun rose when we boarded the earliest possible train to Zurich at 5:36 a.m.  When the sun rose the views out the window were far and clear as the uncrowded train chugged along its peaceful route.  Peaceful that is until we neared Zurich.  Our sudden stress wasn’t because the train became crowded, but because we happened to realize that the bus into Munich required reservations.  Reservations which could only be taken in person or on the phone.

Not knowing what else to do, I called the German transit number and stabbed at the keypad until the automated system (all in German) brought me to a human.  The first person was able to understand me enough to send me to the ‘reservations’ department.  Then when the reservations department picked up, I asked, in my halting high-school German, if they could speak English.  After a long rant in German, they said in perfect English “Please hold while I transfer you.”  After waiting and waiting on this 20-cents-per-minute hotline we were almost in Zurich, so I gave up and we decided to wing it.  Luckily, the bus had two seats open for us, and we carried on as originally planned, albeit with a few new euros charged to our cell phone bill.

The non-stop bus ride to Munich offered us some new scenery along a route we’d never taken before.  We first rode through Swiss cities and farm fields until we came to the second largest lake in Switzerland, Lake Constance, (called Bodensee in German), which straddles the triple border of Switzerland, Germany, and Austria.  At the southern end of the lake we crossed the Rhine River into Austria, our first foray into the country.  We were only in Austria for a few miles, then our bus merged onto the German autobahn.  The Autobahn is famous for having no speed limit, but thankfully our swaying bus didn’t take advantage of this.  We could however occasionally see the blur of the super fast cars and motorcycles zipping by.  As we drove into Germany the scenery became flatter and flatter with the Alps just visible in the rearview mirror, while the farm fields in front of us started to remind us more and more like ones in Minnesota.

Around noon our bus pulled into Munich and with a helpful text from Dorothy, we easily found our way to the doors of the rented apartment we would call home for the weekend.  Everyone else was already there waiting for us.  Jodi, Jean, Stan, and Dorothy were eager to tell us about their time in Italy, and especially about their ordeal running around the Venice train station the night before, where they just barely made the connection for their overnight train to Munich.  We briefly toured the spacious and modern apartment that had some very confusing light switches.  Then we were out the door again to find some lunch. 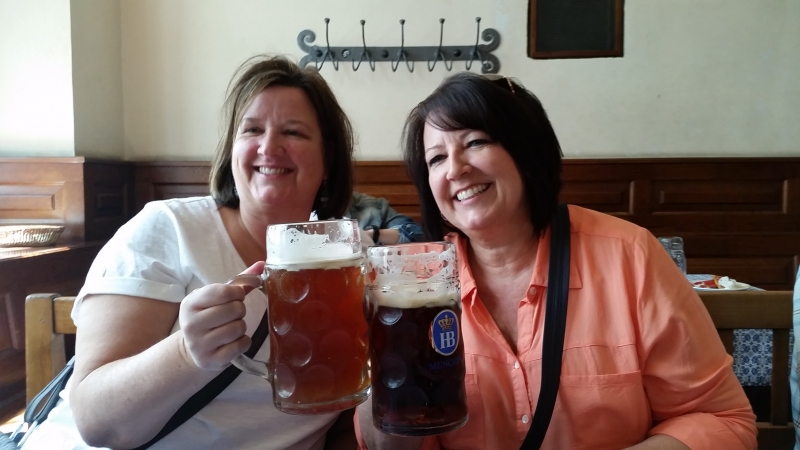 We all loaded onto a city bus and made a short trip into the old city where we stopped at the famous beer hall Hofbrauhaus.  The hall was crowded and chaotic, with drunken shouts and  an old fashioned oompa band playing songs Melissa could recognize from her visits to New Ulm as a child.  Dorothy was so caught up with the crowd that she somehow managed to miss the rest of us at our table.  While I set out to search for her, Jodi and Britt got to know the old German gentleman with whom we were sharing a table. Once we were all together again, we ordered plates of sausages and kraut and beer by the liter.

Afterwards, with our appetites sated, we went for a short walking tour of the old city.  We saw a couple of large old churches, the town hall (Rathaus), and ambled through the crowded cobble stoned streets.  Interestingly, the crowd was dotted with many people decked out in the traditional liederhosen and dirndl custumes of Bavaria, just carrying on with their Saturday like it was no big deal.  After putting on a few miles, we headed back to the apartment for a quick break.

For dinner, everyone except Stan and Dorothy went to a beer garden called Augustiner.  The beer garden was entirely outdoors, in a green leafy park-like setting.  We waded past tables filled with people, mostly soccer fans waiting for the game to start, before we plopped ourselves down.  Melissa and I went to grab beers for the table from the self-serve line, and made a second trip up to grab some more traditional German food for dinner.  We chatted for a few hours as the sun was setting and the match was starting up before we headed back to the apartment for bed. 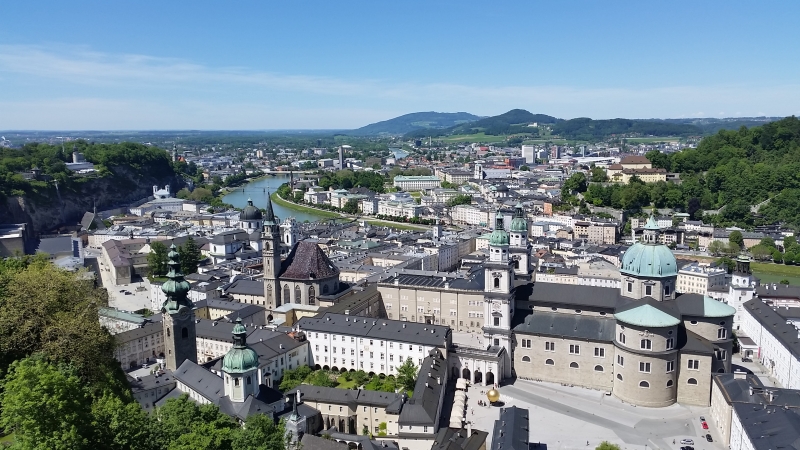 Sunday’s destination was Salzburg, Austria, located about 70 miles, and just an hour and forty-five minutes by train away from Munich. Even though Salzburg was our second foray into Austria this trip, it was our first chance to get out and walk around the country.

After stepping off the train in the city, we grabbed a map to figure out our way to the old town, then hopped on a bus.  We began our tour wondering through the streets of the old town as the sun burned brighter and the temperatures rose.  By the end of the day, we were told it had reached 90 F in the city center – our first taste of summer.

When we were through admiring the, incredibly ornate, pastel colored, buildings lining the old cobble stoned streets, we stopped at another beer garden for lunch.  Jean had tried this beer garden on her last visit to Salzburg, and it was definitely worth a second visit.  After downing beer, sausage, kraut, and dumplings, we managed to pick ourselves up from the table and continue on for more sightseeing.  A short walk took us to Salzburg’s large, baroque, cathedral, where we spent some time wondering around its intricately appointed interior.  The cathedral was maybe most welcome as a tour stop because its cool shaded interior was an escape from the blaring sun and heat outside. 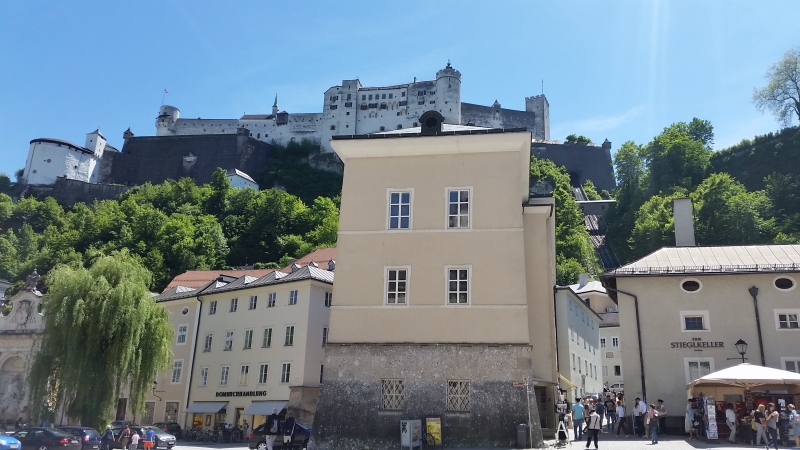 Leaving the cathedral we next wandering through an old grave-yard and crypt, then we found ourselves at the base of a funicular that would bring us up to the giant castle overlooking all of old Salzburg.  After a crowded ride up the side of the hill, we began exploring the castle grounds.  The grounds were much larger than they looked from below and seemed to actually be the size of a small city.  We learned that Salzburg used to be ruled by a bishop and this castle is where he lived.  We made our way through a museum within the castle, which was filled with old furniture, instruments, household goods, and even some artifacts from the two world-wars.

Once we descended from the castle, the heat got the best of us and we decided it was time to head back to Munich.  It took us a while to find the bus that would bring us back to the station, but once we arrived, we found our train was fifteen minutes late, so it all worked out.  Oddly to board this train we had to go through a passport control made out of paper signs and plastic police ribbon.  While I’m not sure if it was set up by Germany or Austria, the idea of checking passports at the border is new to Europe.  Most of Europe is a part of the Schengen Agreement, which allows free movement across borders, but with the refugee crisis many countries are going back on their unity.

Back in Munich we decided to go straight away to dinner, but Stan and Dorothy decided to call it a night and head back to the apartment.  The rest of us found our way back into the old town, and back to the Hofbrauhaus for our last taste of German beer.  This time we opted to eat outside on a second level veranda, away from much of the noise.

We said our goodbyes Sunday night at the apartment, then woke up before the sun on Monday to begin our trip back to Switzerland. It’s always fun to visit Germany and even better with friends and family!

One thought on “Another Weekend Visit with Family”