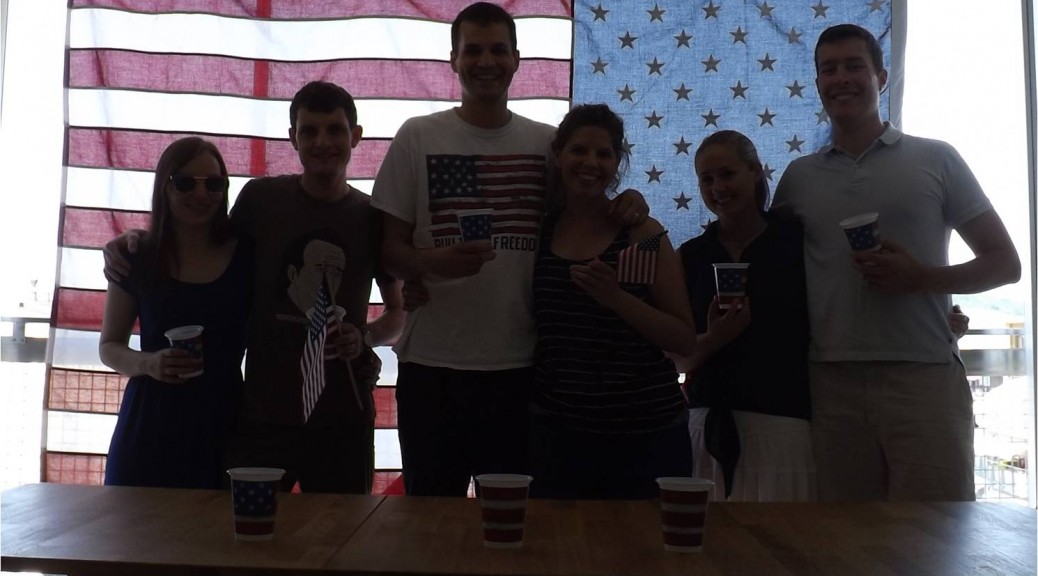 Even though it’s over 3000 miles to the shores of the greatest country in the world (don’t ask how many kilometers unless you’re a communist), this last weekend “The Land of the Free” was present right here in our apartment within the hearts and minds of six young patriots. Along with Melissa and I, Garrett Swindlehurst, Anna Haugen, Patrick Smadbeck, and Caryn Krakauer – friends of ours from Melissa’s grad school days – tried our best to bring a little more freedom to the people of Europe as we celebrated America’s birthday.  In the very hot Swiss weather we saw the sights, hung up a giant American flag, and relaxed on the shores of Lake Geneva swimming and grilling along with Melissa’s European group mates.

The first to arrive on Friday were Patrick and Caryn.  They are currently living under the oppressive monarchy of America’s former ruler, the United Kingdom.  Their flight to Geneva landed at 11:30 a.m., however, perhaps because monarchists aren’t as trustworthy, they had to go through customs first before entering Switzerland.  I met them as they exited the gate at 12 p.m., and we then boarded a public bus to see the sights of Geneva.  My normal tour guide route is to take the train from the airport, but because of the heat, and fear of the tracks buckling, a lot of trains were being canceled on Friday.

We saw the main sites: Parc des Bastions, old town, cathedral, and waterfront, all by foot while carrying bags in 96° F temperatures.  When we made it to the main train station, the trains that normally leave every 10 minutes toward Lausanne, now left only once an hour (again due to the unrelenting temperatures).  Luckily, we only had to wait maybe 20 minutes for one that was surprisingly not crowded.  We made it all the way back to the apartment without any tracks buckling, and dropped off the bags, before boarding a different train to Melissa’s school.  Melissa had to work until 5 p.m., so we had to kill a little time wondering around the campus and to the lake before meeting up with her.  Then the four of us went into Lausanne for more sightseeing… all of this in the same heat.  After seeing Lausanne’s old town and cathedral, we sat at an outdoor bar to wait for Garrett and Anna.

Garrett and Anna had been in Switzerland since the 26th of June vacationing with Garrett’s family.  They were the original inspiration for our international Murican Weekend.  After meeting us at the bar, the now six of us went to the lakefront and found a restaurant for dinner. Even though the flame under the pot didn’t seem necessary in the heat, Patrick and Caryn managed to enjoy a full portion of hot, cheesy fondue.  At the restaurant we were happy to find our favorite summer drink from Italy, the spritz, was also available.  Once we left the restaurant and were back in the apartment the last task before bed was opening the dining room blinds wide open so the first thing our Swiss neighbors would be greeted with in the morning would be our big American flag.

Saturday, the fourth of July, began with an American-sized breakfast (quiche, rotsi, croissants, and fruit), though maybe the food was not so American.  After eating, the six of us caught a train to the Lavaux region where Garrett and Anna found a nearby beach, while Patrick, Caryn, Melissa, and I took a short, hot (Saturdays high was 99° F) hike up to a wine cave.  The views and wine from the hike were pretty good, but coming down and wading in the refreshing water made me think maybe Garrett and Anna had the better idea.

In the evening we had planned to grill at a beach closer to Lausanne with Melissa’s group, so we caught a train back to the apartment where the difficult task of packing everything needed for the beach was waiting for us.  If only we were in America and we had that little invention called an automobile, everything would have been much easier to haul.  We had six sets of hands, but with all the food, the drinks, towels, cooler, and grill it was a long, cumbersome, hot, walk to the train, and also from the train to the beach.  Making our walk easier, though, was a freedom available in Switzerland, and not yet available in America: the freedom to carry an open beer in public and on the trains.

At the beach we swam, drank beer, grilled and showed the eight members of Melissa’s group that showed up a good old fashioned Fourth of July party.  Garrett kept us entertained with a boomerang he brought, that despite how many times he or anyone else threw it, never seemed to come back to the thrower.  The food and beer lasted until the dark, with the only thing missing being fireworks.  We were reassured by Melissa’s group though, that the fireworks will come… just 10 days late, across the lake in Evian, France for Bastille Day…

One thought on “Murica Weekend!”